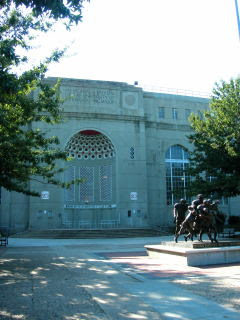 This is Memorial Stadium on the downtown campus of the University of Nebraska. All's quiet now, but give it a couple hours and the place will be rockin', filled to capacity and beyond with crazed fans. When filled on game day, Memorial Stadium becomes the 3rd largest city in Nebraska. 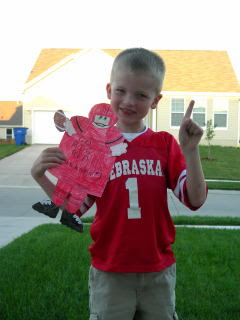 It was "Game Day Friday" for Sam at school yesterday so he wore his jersey and made the cutest little husker guy (at this rate his red crayon will be gone by Thanksgiving). Those are your tax dollars hard at work.

Let me digress. Stan (Tony's dad) came out to Lincoln to go to a game with Tony during his second year of law school. They were playing Texas. Well, they had left for the game and Sam and I were braving the traffic for a quick trip to Target. We had stopped at a stoplight and a jeep full of crazed college-aged boys pulled up behind us. Well, they start to scream and yell, honk their horn, and flip me off. I couldn't figure out what their problem was...until I realized that our little purple Civic still had Texas plates on it. I looked down at my BRIGHT RED HUSKER SWEATSHIRT and back at Sam in his BRIGHT RED JERSEY and just had to shake my head. That's the kind of fans we have here. 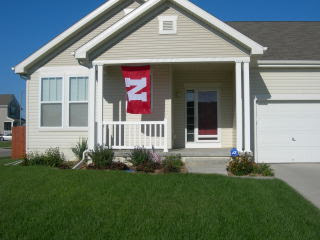 Cutest little corn husker I've ever seen! Sam is so cute! Tell him we love him!

Your house looks adorable too!

Love that they did a game day at school!!

Troy was just asking if we could get a husker flag to fly since our neighbor proudly flies his orange TX flag every game day.

Can't wait to see you Saturday!

The story of you being honked at is super cute! Glad you enjoy football. We love it at our house. GO COUGARS!