I had one of those days yesterday. Josh didn't nap well, the laundry went unfolded, I had to take all three kids to Target (torturous, I tell you), and I lost my temper with my sweet children. And to top it all off, Tony didn't get home until after the kids were already down for the night. I was frustrated. I felt like a terrible mother. Pretty much like an utter failure. But most significantly, I felt for the day the frustration single moms must feel.

When I went up to get ready for bed after my run, I found a note on Tony's nightstand from Sam. 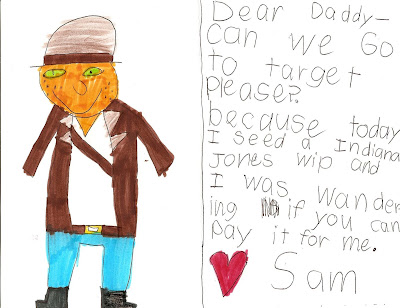 While at Target, Sam saw a display of Indiana Jones toys that included a whip. Well, Sam has been really into Indiana Jones lately and wants to be Indy for Halloween. And Indy MUST have a whip. But I told him I couldn't buy it for him...it was too much money and we were only halfway into the aforementioned torturous trip to Target. So he asked his dad to buy him the whip.

Now, when you marry a man, you hope and pray that he will be a good father. After what could only be described as a day ten times worse than mine, my dear, sweet husband penned this response and left it out by Sam's breakfast dishes for him to see this morning. 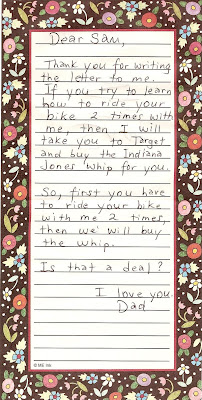 I am so grateful for the wonderful men (both big and little) in my life. And today will be a better day. I just know it.

Your day sounds a lot like how mine went yesterday.
Love the little note writing. So cute. :0)

I love it what a great guy! And yes I think we all have those days when we want to sell the little blessings to the gypsies but then the next day it gets better don't you just love it!!

The notes are so sweet! I'm not the only one that has days like that? Whew!

So So sweet! Don't you love how they know when to go to the other parent to get what they want!

Hope you have a much better day! And you're NOT alone... I have had my share of those days too. Chocolate+ sleep= happiness!!!
Chery

So very priceless...brought a lump to my throat & tears to my eyes. LOVE the Indy picture. - He REALLY wants that whip!!

Sam's handwriting is getting sooo grown up! And what a great speller! Nice work! You really do have a house full of great men! Sorry about the bad day too, so sad. I had one too yesterday, I should've called you.

P.S. SOOOOOO jealous of your garden. Ours is all in these lame plastic planters that are now being taken over by everything we didn't think would grow! YIKES!

P.P.S. I definitely think this is the LONGEST comment I've ever left. You should feel privileged!

So cute! I think that's a pretty great deal. Sorry you had a bad day. When I have those I always think I'm such a bad mom too and wonder why I was entrusted with two kids, but then there are those great days where I'm so blessed to have them.

What a good hubby! I love that they wrote little notes to each other.

That is so precious. I'm glad you documented it. :) Sorry for your bad day, but it helped me to realize that if a super mom like you can have a day like that, then it is okay for me to have them too. Thanks. :)

I absolutely adore that your husband wrote him a note. Love that! And it sounds like a pretty good deal too.

P.S. Darling note by Sam, of course, too. Well done!

What a great dad. I'm evil, somedays I wish my hubby weren't such a good dad so that on my bad days I wouldn't look so bad compared to him. But eventually he has a bad day, so I guess it evens out. =)

I've had many single mother days and it is tough.

arn't lifes little lessons so sweet! especially after days like that.

I am glad to know all of us mothers are in the same boat...it would be even more overwhelming and depressing to think we were the only ones to have days like that.

How cute. I like how Tony thought of something Sam must do first, rather then just saying "No"... I'll have to remember that one.

You and I had the same day, sad to say that. And those notes are the cutest. There is nothing sweeter than a daddy and son bond, it is truly such a wonderful thing to see happen.

You are BOTH fabulous parents and people! I love you dearly. Isn't is great that our kids have a mom AND a dad. Yin and yang. Balance. Compliment. Your children are blessed.

OMGOSH....such a cute Daddy to write him a letter back! I love that. And as for Kids with Target, it's like eating Chocolate Cake with a side of Broccoli....as much as I really do LOVE broccoli, it just doesn't mix with chocolate cake and kinda ruins the experience WHEN it's combined with the cake. LOL! Same with my kids. I love my kids and I love Target...they just don't go well together. LOL!

That is adorable. Love the notes!

You are both AMAZING parents. I hope Russ and I can be just like you two and our kids will be as cute as yours. The notes back of forth between Sam and Tony are priceless--They brought tears to my eyes and reminded me once again what's really important in life--our families. Love you guys!

thanks for sharing your bad day! I'm glad to see I'm not the only one! have a great day today!!!

This is the BEST. We are all about Indiana Jones around here, too. No one's mentioned a whip yet, though. Wonder how long that will last! Tony is a great dad.