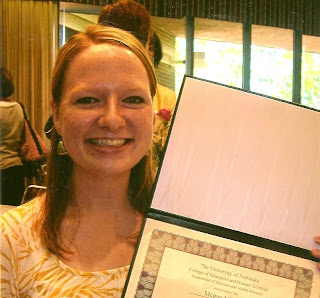 This is a bit late in being posted, but a week ago Saturday, my sister Megan graduated from her Dietetics's Internship. It has been a long year of hard work and determination on her part and we were so pleased to make the drive down to Lincoln to be there with Megan for this big occasion. In another 6 months, she will have completed her Master's degree. Anna and I attended the ceremony and Tony took the boys to Morrill Hall to see Archie.

Then we took Megan out to eat to celebrate and low and behold, we run into our good friends Leah and Chris Pobanz at Applebees!

This past weekend, Tony and two other attorneys from the legal office competed in the Mayor's Triathlon (Tony did the running leg). I don't have any pictures because, well, Tony took the camera with him and then didn't take any pictures. So just imagine us cheering our little hearts out for Tony as he flew by all the other guys who were tired from their swim and bike ride:-). Their team took second overall...way to go guys! 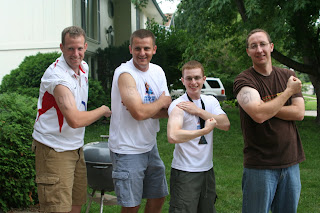 **UPDATED** Holly Odgen (her husband Aaron did the swimming leg of the Triathlon on Saturday) sent me some pictures of the guys so I could post one. Thank you, Holly! Tom, on the far left, actually did the entire Triathlon and then he and his wife hosted a BBQ that afternoon. 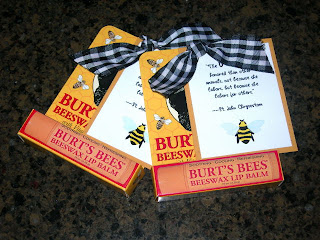 I also wanted to share our visiting teaching gifts for August. For some strange reason, I have always associated bees with the month of August. So I got some Burt's Beeswax Lip Balm, attached a cool quote and called it good.

Our family is leaving this week to spend 2 weeks in Alaska with my parents...a trip that has been so highly anticipated that I think grandma has a countdown paper chain, too. I'll be checking out blogs and my email, but may be a little slow to post depending on how much I can edit my digital pictures from my parents' computer. Also, the week we get home is the one year anniversary of our blog, so check back for a giveaway...maybe even with some stuff from Alaska in the mix...
Posted by Amber M. at 8:07 PM

Have a wonderful trip! I can't wait to hear about it and see pictures.

Hey very cute idea for VT! I think I associate August with The burning hot sun! Congrates to your sister as well. I love the picture of Josh in the bowl.

Congrats to your smart sister! :)

Have fun in AK, but don't wear the parents out, okay???

Hope you have a great trip!

You have the cutest sisters! They must get it from their older sister.
Have so much fun with your family visiting the parents.
Chery

That's funny...for August I think of bees too and sunflowers. Have fun on your trip. Bet you and your mom come up with a cute craft too.

love your idea, I'm a spyer, my sister I think is a friend of yours and I linked to your blog, and now I'm so glad I did, cute idea, I think I may use it!