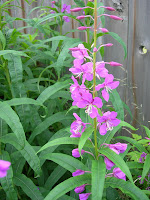 I've been hoping to get some good pictures of the mountains to share, but it has been so overcast that I finally resorted to taking some pictures of fireweed today. Since I grew up here, I have always considered it, well, a weed. But the first summer that Tony and I spent in Alaska after we got married, he absolutely fell in love with fireweed. It has a pretty cool story. We call it fireweed because it is the first regrowth in an area after a forest fire. It grows rampantly along the highways and makes a yummy jam. But the coolest thing about fireweed is that in mid to late summer fireweed begins blooming in the middle of the stalk, with each successive flower blooming just above the one before it. As the last flowers are blooming at the top of the stalk, the earliest blooms seed and turn to cotton. When the fireweed turns to cotton, Alaskans say there are about six weeks until winter begins. 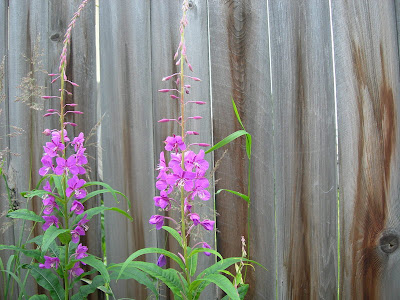 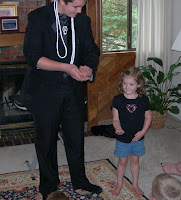 And remember Sam's magic trick? Well, when my dad saw his enthusiasm, he hired a magician to come perform for FHE tonight at the house. We had my cousin Emily and her two kids come as well as great-grandpa and great-grandma. The kids (and adults!) were mystified!
Posted by Amber M. at 12:07 AM

Wow how cool is that Fireweed! You got some great pictures. I love the glasses Sam made. I think he could start a fashion trend! Im so glad you had fun seeing family, I know I always do. Take care

How fun and what great memories you are making. Great lesson on the fireweed. I have been to Elmendorf twice...once in July and once in January. Only 4 hours each time but got to drive around the base, view the mountains and see the icicels that were like pillars at the BX!!

We spent our first summer in AK and we too "heart" Alaska. And I love fireweed! Thanks for shareing