A Face of Sacrifice

When it got about time for Anna be get home from preschool yesterday, I went outside to sit in my red rocking chair on the front porch and wait for her. On the way out the door, I grabbed some light reading in the form of Tony's September issue of Air Force Magazine...hey, I was desperate. I'm so glad I did. As I was flipping through, I found an article listing the 12 2008 winners of the Outstanding Airmen Award. As I read over each of these Airmen's accomplishments, I could only imagine the sacrifices that were made behind the scenes. Mothers, children, wives, days and nights of fear and worry. 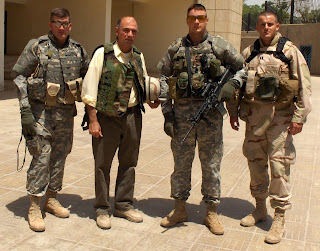 When Tony was deployed to Iraq, I stopped reading the paper or watching the news, just to be able to function without losing my mind with worry. (Tony's on the far right.)

But one of the profiles really astounded me. SrA. Shawn Ryan. Being a Senior Airmen, he is most probably in his early 20's. He is a Security Forces Patrolman (a military policeman) at Sheppard AFB in Texas. This is his write-up.

Wow. When most young people are going to college, concerts, hanging out with friends and keeping their own schedules, this young man is being a hero. Literally.

Until everyone comes home.
Posted by Amber M. at 7:56 PM

Wow! You are right on with those thoughts.

I 2nd your thoughts. My heart is with them all. xo

I salute all of you who do sacrifice so much to protect our country! I can't imagine it is easy for those who serve or their loved ones who miss them while they are gone.

Go U.S.A. and to you and your husband and your children and family thanks!!!!

Right up the hill from us (where you and I used to go walking), there is a house that always has anti-war posters on the front lawn. My boys were riding their bikes and saw the sign while Lane was still in Iraq. Imagine how that made them feel! Like you said, nobody really wants us to have to be there. But since we have to be, we need everyone to SUPPORT OUR TROOPS! They need the prayers,love and support of our whole nation because THAT is who they are protecting. ALL of us.

Thanks for speaking up and sharing.

what a beautiful post and tribute to our heros. it's too bad the newspapers don't print articles like that--everyone would be so inspired!

oh, and the pictures of sam and josh are too darling :-)

Wow, what more can a person really give for its country. Thanks to all you who give your husbands and wives to defend our country and help out others.

I borrowed Tony's picture & a portion of this to post on my blog. Check it out, & if you would rather have me remove or edit it, let me know.