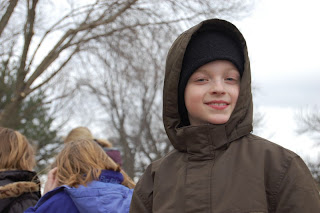 Who would have thought when they planned the 2nd grade day at the Henry Doorly Zoo on the 31st of March that it would snow. Seriously. But, being a die-hard supporter of Sam's education (and wanting to use that good 'ole zoo pass one last time before it expires today) Josh and I joined up with Sam's group and braved the intermittent snow and frigid wind to take in the indoor zoo exhibits. 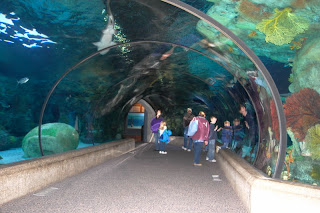 The aquarium is fantastic. No matter how many times we go, we are astounded by the underwater walkway, the sharks, sea turtles, and rays.

And my personal favorite, the sea dragons.


Just me and two of my favorite guys. And a bunch of gorillas. 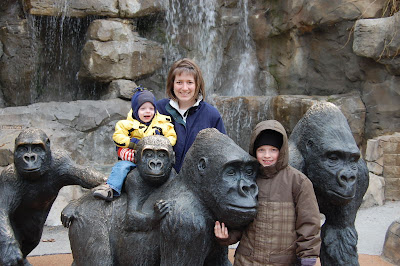 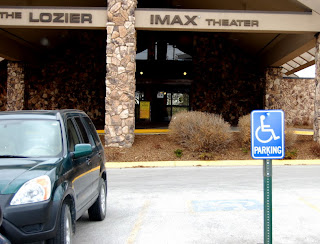 This picture pretty much sums up how yucky out it was today. The Henry Doorly zoo is immense. It is popular. And it has so many visitors that it shares a parking lot with Rosenblatt Stadium which is the site of the College World Series. We usually HIKE to the IMAX zoo entrance. But not today. That's my car. In the space next to the handicap spot. Right in front of the entrance.

Mother of the year I tell you!!@ms

sounds like a trip to the Alaska Zoo!! gotta use that pass ALL year long! :) we were just talking about going again . . .
here comes april - probably more snow and ash for us.
happy spring!
courtney

Isn't it nice that a good portion is indoors! You're such a good mom.

Oh I love the Henry Doorly Zoo...and miss it too! Good for you for braving the cold.