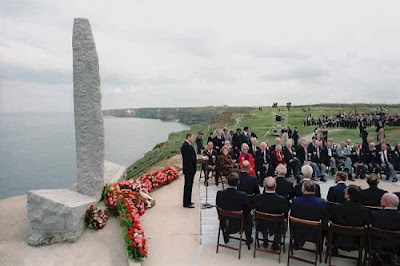 "The men of Normandy had faith that what they were doing was right, faith that they fought for all humanity, faith that a just God would grant them mercy on this beachhead, or on the next. It was the deep knowledge -- and pray God we have not lost it -- that there is a profound moral difference between the use of force for liberation and the use of force for conquest. You were here to liberate, not to conquer, and so you and those others did not doubt your cause. And you were right not to doubt.

The Americans who fought here that morning knew word of the invasion was spreading through the darkness back home. They fought -- or felt in their hearts, though they couldn't know in fact, that in Georgia they were filling the churches at 4:00 am. In Kansas they were kneeling on their porches and praying. And in Philadelphia they were ringing the Liberty Bell."
--Ronald Reagan
(Excerpt of the speech delivered 6 June 1984 in Pointe Du Hoc, Normandy, France on the 40th anniversary of D-Day)

God bless the troops, then and now, who worked and are working to liberate, rather than conquer. And may we always remember the difference.
Posted by Amber M. at 6:42 AM

I do believe that what they were doing was right. And do believe people today have to have that same faith.

When we were stationed in Germany, Steve went on a 'fieldtrip' with his Squadron to visit some of those famous sites and beaches in France...I wish I could have gone.

It is one of my dreams to go to Normandy.
Someday, someday.

Thanks for the excellent quote.