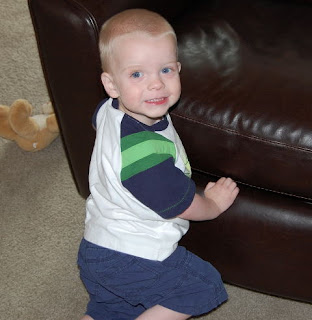 When I took Joshua in for his 18-month well-baby check last Fall, I had no idea the challenge we were beginning with our little man. Our pediatrician, who I respected and trusted, told me he was concerned that Josh wasn't speaking. I assured him that between his siblings and his mother, it was a miracle he ever got a word in edgewise. Sam was a little slow to talk also, so I wasn't overly worried. We decided to give it another 6 months and look at things again at his 2-year appointment. And things were not much better. He only said about 15 words and wasn't putting words together yet to form phrases. So about 6 weeks before we left Omaha, we went in to see an audiologist who gently informed us that although Josh had passed his newborn hearing screening, he was not passing them now. They assured me that a lot of it could be due to his allergies and the buildup of fluid in his ears, but with no real history of any infection...nobody was really sure what was going on. So they put him on an aggressive regiment of allergy medication and set a follow-up test about 2 weeks before we were to leave Omaha. Although his overall hearing test was a touch better, he failed the screenings again. So just a few days before the exodus from Omaha while staying in temporary housing, Josh got tubes to help with the fluid build-up in his ear. He has done very well.

BUT, with a pretty remarkable family history of deafness in my side of the family, we were a little scared. What if there was a bigger problem? What if he wasn't speaking because he couldn't hear and the tubes couldn't help?

But today, we had a follow-up appointment with an audiologist, redid all the screenings and he passed with flying colors. There is no permanent hearing loss and the tubes continue to keep his ears clear of fluid.

And his vocabulary is exploding.

that is such great news! Hooray for Josh!!

That's wonderful! Here's a shout out for Josh: YAY, Josh! (and Yay for his great, kind, loving, and wonderful parents)
:~D

HURRAY!!! Glad the tubes are helping so much. My dad is an ENT and does this surgery regularly. It helps tremendously.

Reason to shed a few tears of joy!

I am so glad that the tubes have helped!!! Pretty soon you guys will be the ones trying to get a word in!

Yeah! That is great news!

Very good news! I'm so glad it was resolved! Especially with a move in the middle of trying to solve it. Yay for Josh!

Yeah Josh, can't wait to read future posts about the things he says.

That is such good news!

Hooray! What great news. I am so glad you are able to put that worry behind you!

So happy for you.

that's fantastic that josh is doing so well! i'm so glad the tubes worked out and that his little voice can finally be heard!

Glad things are ok, I'm sure it's been a huge worry not knowing. My kids were all slow to talk also. I remember taking my daughter to get here ears tested when she was about 2 1/2, thankfully everything was ok, they said she was just head strong.

good to hear Josh is doing well. my sister almost lost her hearing before it was caught - tubes and adnoids out solved it. i certainly feel it's been good that we've used ASL with our kids from the time they were infants - they have it to help when they're young, and then if something happens later, we've got it then.

That's awesome - and I'm so happy for you all. Especially little Joshua! ;)

I'm so glad the tubes helped and all is well. How stressful! Glad he's doing well.

What a relief that must have been! So glad he's doing better!

Hey Amber! So glad your little man is doing better now! How are you doing? Settling in? I hope you've met some super great and nice neighbors there to make it an easier transition...
xoxo Les

Oh, Amber, I am so relieved to *hear* that Josh passed his audiology test! Please keep us posted on how his speech comes along.

I read your post on Josh's good news today and sat in my living room crying.... We have a son who also had MAJOR fluid build up in his ears with multiple ear infections... and he was tongue tied at birth (and we were told it would "go away") needless to say thanks to a heaven sent ENT and audiologist our little guy is now 5 and has an amazing vocabulary... it makes me thankful everyday for the USAF and TRICARE! So from one mommy to another... Hooray for Josh, his ABC's were amazing!