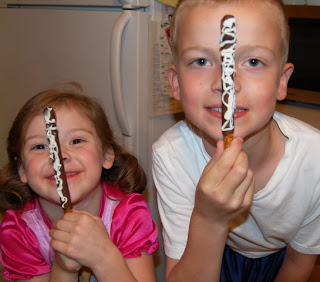 The big kids didn't have school today so we planned a little project to do while Josh napped. I saw these in a Halloween idea magazine and thought they were so very cute! Now, they originally call for mini M&Ms for the beady mummy eyes (which is much cuter) but I couldn't seem to find any ANYWHERE so we were reduced to using mini chocolate chips. But you get the idea.

First, we melted milk chocolate squares in a double boiler, dipped the pretzel sticks, attached the eyes to the wet chocolate, and let them harden in the refrigerator. When the chocolate had set, I put some vanilla icing in a freezer Ziploc baggie and cut a hole in one corner. The kids had a ball "wrapping" their mummies in icing! They are almost too cute to eat. Almost. 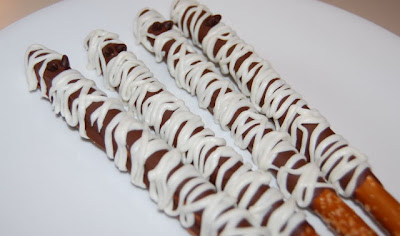 Have a wonderful weekend!
Posted by Amber M. at 9:17 PM

Oh, I love this idea! Lauren is planning a "Egyptian" birthday party! This will be PERFECT!

Yum! I want one NOW!

They are SO adorable (the kids AND the mummy sticks). I miss you all and love you a TON!

So cute!! Some times the candy aisle has little containers of them right by where you check out. I have also seen them in the baking aisle with the choc chips. Darling with out them as well!

Very cute mummy idea. I miss you! See you soon.

Now this looks like a project I can do! Very cute, and I also like your new red cutains. They will be really great at Christmas time!

Yummy mummy in my tummy!

once you harden the milk chocolate could you use white coco instead of the frosting?

How CUTE are those?!!

Is there a limit to how many times I can comment, "You amaze me, Amber!"?? I sure hope not!

How cute! And what a yummy snack, too. My little guy will love these!

Adding these right now to my Halloween baking list. Brilliant!