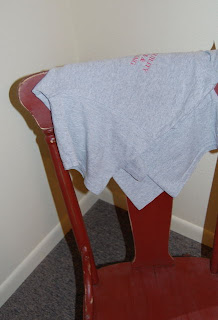 The first time Tony deployed was about 10 years ago to RAF Mildenhall as an Intelligence Officer in support of the Kosovo conflict. And being a young Air Force wife and new to the whole deployment thing, I made a rookie mistake. The day after he left (in an attempt to stay busy, I suppose) I did every piece of laundry. Including sheets and pillowcases. It didn't take me long to realize that I had completely obliterated anything that smelled like him. He had taken his soap and shampoo with him and I had just washed away everything else. So now every time he deploys, I make him leave me the shirt he wears the day he leaves...just to have something that smells like him for a little while. And it helps me not miss him so much. 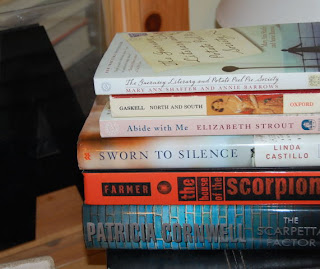 And this helps too...a huge stack of books all ready to read. If I ever get through Robinson Crusoe, that is.

And every so often, a little of this doesn't hurt either. (I know you're drooling too, Camie...)

My parents come tomorrow to keep us company for a few days...hooray for visitors!
Posted by Amber M. at 11:22 AM

Darn! I was going to grab Ann to help me with a Young Women's project I've got to get going that involves Master Sewing Skills :)

Good luck with Robinson Crusoe, I read what you'd said about it and tried to remember my own recollections of it way back when. I do remember Moll Flanders was better.

I can't even imagine how you do it. I would go completely crazy without Mike here at home. I've been totally spoiled having him work from home. Great idea having him leave his shirt! (I sleep in Mike's pajama pants when he does have to go away... that helps too!)

Thanks again for all the cute ideas and yummy recipes -- I'm excited to try the pumpkin scones soon!

Smart girl to keep that shirt around. I think I'd do the exact same thing. Hope you're hanging in there. Amber, I think of you so often.

I loved the Guernsey Literary and Potato Peel Pie Society. I think that one might be a nice little distraction for you.

Have fun with your parents!

I do the same exact thing! My husband left in September for 6 months and I slept with his shirt for the first week I think.

I love your attitude and your creative coping skills! I hope the time goes quickly and that you are able to read all those books!

I hope you and your mom come up with something good to share...you always do!

As for Robinson Crusoe... there are too many great books to be read to waste time slogging through a boring one!

Okay, I totally teared up on this one. I love that he leaves behind the shirt he was wearing...for his smell. Smart idea. And have fun reading your books and hanging out with your parents! ;) Miss you!

I totally teared up that you keep Tony's shirt with his smell on it close by. I would do the same if Russ had to leave for that long. You guys are so amazing and we pray for you every day.

I hope you have a nice weekend with your family. Please tell your Mom hello for me!! I remember that time you washed his shirt, you were so upset and gave me the advice to not do the same. Whenever my husband has to go out of town I always remember that and put a shirt aside. Thanks...

I am a little late on getting to this video...but yes drool was involved. Aw...someday I will see him live on the front row. Hang in there and we will be thinking of you.