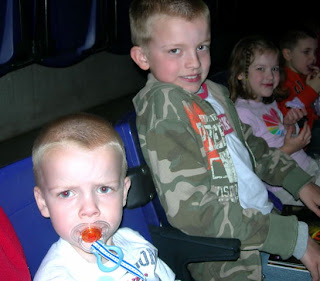 The Air Force has a really neat program in place for families with deployed parents. They issue the family what are called "deplayment" cards and they entitle your family to some really fun, COOL stuff for free. So today, a group of us took advantage of this and went to see Walking With Dinosaurs at the Spokane Arena. The big kids were so excited, but you can tell by the look on Josh's face that he wasn't so sure. At one point Anna, Josh and I went to the restroom while we were waiting for the show to start and Josh was convinced that the dinosaurs were going to eat Sam while we were gone.

The show is really a neat thing to see. The dinosaurs are huge and in some cases, a little scary. But the set and the dinosaurs themselves are so cool!! I took a little clip of the Paleontologist talking about the Ankylosaurus. I would have gotten a clip of the T-Rex, but Josh fell asleep (if you can believe it) and I had to cover his ears because that thing could ROAR!!

Oh---how jealous are we!!!!! You know how the moore's LOVE dinosaurs! Lucky you!

That dinosaur is SO cool. No doubt
the kids LOVED the show.

Love and miss you.

How neat. And free makes it even better!

I'm really glad they have programs like that in place. You deserve it!

And thank you for your service and sacrifice.

That has got to be the coolest thing I have EVER seen. Also, Sam looks so grown up in you blog title picture!!