After we visited Kalama, we crossed the gorgeous Columbia River into Oregon. I must admit that a lot of the drive reminded me of the scenery in Alaska...made me feel right at home. My first impression of St. Helens was "How the heck did they find this place and why the heck did they pick it?" It's kind of a dirty little town, but it does have a sort of down-home charm about it. 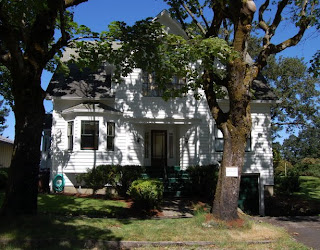 The first stop we made was to the house that serves as Charlie and Bella Swan's home in the Twilight movies. It is an actual private residence and they used it for both the inside and outside filming.

I can't imagine the weirdos (um, including us) who are constantly wanting to get their picture taken in front of their house. I bet they had no idea what they were signing up for when the agreed to it.
The little sign on the tree asks the crazy Twilight fans to please respect their privacy, but that they are more than happy to let you take pictures. 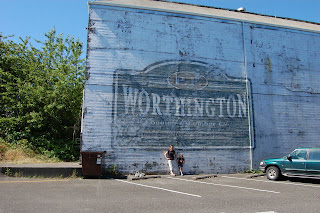 The second stop was 2nd Street S. where they filmed most of the scenes in Port Angeles. This is the big wall mural that is in the background when the bad guys accost Bella in the alley and Edward (and his Volvo) come screeching up to save her. The mural was really cool.  The scene where they drove away is also filmed right there on 2nd Street South. 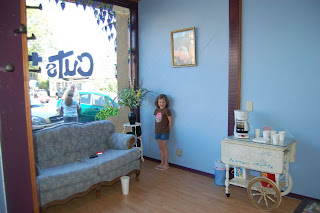 A little further down the street is a hair salon where they filmed the dress boutique where the girls shop for Prom dresses in Port Angeles. They just brought in dresses, I guess, because it's still just a hair salon. This is Anna standing in the window where the scene was filmed. 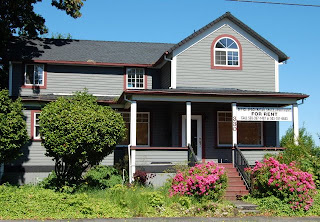 And lastly, down at the end of the street is the building they used to film the diner where Edward takes Bella after he saves her...the one with the waitress with crazy hair. It's for rent, just in case anyone is interested.

I think we spent all of 45 minutes in St.Helens (and that included a gas stop) but we had a lot of fun. Tony was such a great sport. All in all, the drive was beautiful, the kids all had a ball (except Josh who slept all through St.Helens)...
One more post to come on the day we spent in Seattle...
Posted by Amber M. at 9:12 AM

I am jealous and you don't even know me!

How fun to go on a family road trip!!! Glad you got to see some fun stuff.

Amber that is so fun! thanks for sharing the pictures of the "Twilight" stuff, I felt like I was there with you!

Looks like so much fun and it is beautiful. One day we would love to make it over there...

I bet there will be a lot of jealous ladies out there when they read this post!! :) What a fun trip you had.