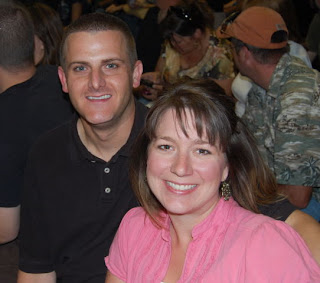 Last night was the much anticipated (at least by me) Rob Thomas concert. It was so random that I even found out he was going to be in the area...one night I was driving into town and there was a billboard announcing the Summer Concert Series at the Coeur D'Alene Casino in a tiny little place called Worley, Idaho. When I got home, I went online and sure enough, he was doing what they called an "intimate concert" benefiting he and his wifes' foundation named Sidewalk Angels. I begged Tony to go with me (because my friend and fellow Rob fan, Camie, lives in Utah now) and he RELUCTANTLY agreed to go. After all, I have a little, teensy crush on Rob. Teensy. I'm glad I got tickets when I did because not a week later, the same billboard announced the concert was sold out. 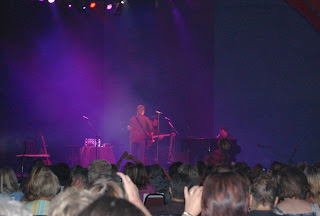 It took us about an hour to drive to Worley and when we got there, we had to walk through the actual Casino to get to the event center. Gag me smoke. We gave them our tickets at the door and walked in (seriously) to a room that at the MOST would hold about 2000 people. There were chairs set up on the floor and bleachers set up along the back wall for general admission tickets. Tony and I were about 15 rows from the back and we could see the stage perfectly. (This is how well we could see from our seats.) 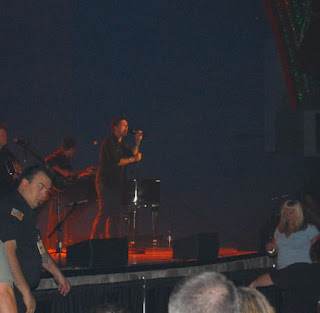 The most amazing thing about this concert was that aside from one song when one of his back-up guitar players was plugged in, the entire concert was acoustic. Just him. Singing at the mike with and without his guitar or sitting at the piano, playing and singing. No drums. A.Mazing. I went in with three songs I really wanted to hear, but one was a Matchbox Twenty song Unwell that I thought he probably wouldn't play, Streetcorner Symphony which has so much background that I thought he wouldn't play it, and one other. He played them all. Acoustic. He played the piano for Streetcorner Symphony. (I snuck out of our seats and up to the side of the stage to get this picture...he's singing Smooth.)

The guy is an absolute character. He expressed appreciation to us for buying tickets and for the support that gave his foundation to do good. He sang some covers, explained some of his songs, but mainly he just sang for about 2 hours straight. About 4 songs in, Tony was LOVING it. The guy is a talented singer and songwriter who can stand alone on just his voice and sound amazing. This was the third song I really wanted to hear. He admits that he writes a lot of angst-ridden songs, but this is his one song that is unabashedly a straight-up love song. It made me cry. 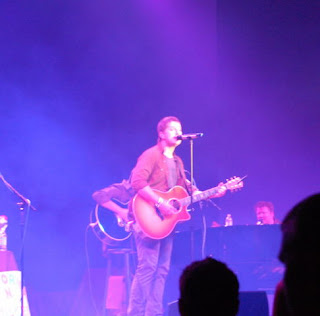 About two songs from the end, Tony and the complete stranger on my left kept trying to get me to go up one of the two center side aisles to get a better picture of him. People were doing it all night, but I was totally embarrassed and didn't want to do it. As a fan I talk a big game, but I'm actually a big chicken. Tony turned to me, looked me right in the eye and said, "If you don't do it, you'll always regret it." So I did it. And got WAY close and some pretty great shots. 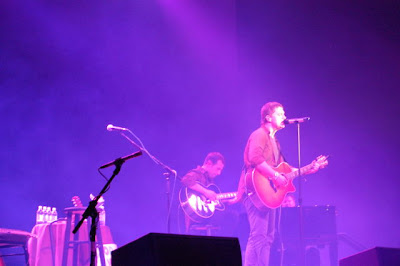 I love live music. Mike and I are going to see a local band play next week. Can't wait.

Rob does rock. How fun to have gone!!

Ok, let me pick my jaw up off the ground really quick....sigh....I wish I wish I would've been there with you. However, you would have probably had to hold me back from jumping up on the stage with him. It sounds like it was amazing...to say the least. I am so glad you finally got to see him though. My turn is in the near future, I can feel it.

So So So very jealous. What is your favorite CD? I need one, but have not had a lot of time or money to experiment with finding the one I have to have. Mike maybe a bit jealous of Rob:)

I'm glad you could live the dream--and that you took the initiative to get up close!

so fun!!! that's so awesome that he played all acoustic--incredible! i'm so glad you got to go!

How fun was that!!! I love his music! I have a bunch on my iphone! Paul did not act jealous of Tony....but I am! Lucky you!

Good for you! Glad you enjoyed a fantastic concert...with your hubby and your crush. ;)