**If you still want to get in on the Nativity Block giveaway, go here to enter before December 15th!** 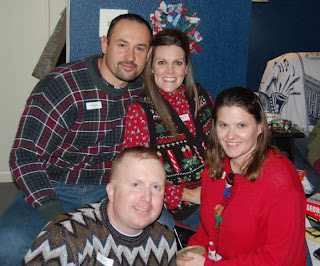 Our friends Phil and Nicole Boal have an annual couples Christmas Party at their house. Last year, I couldn't go because my "couple" was still deployed. So we were both super excited to get to attend this year. And to spice things up a bit, they decided to make it an "ugly Christmas sweater" party. So Josh and I spend an afternoon scouring Goodwill and Value Village looking for ugly Christmas sweaters. Which were remarkably hard to find...I guess ugly sweater parties are more popular than I had imagined. Anyway, we showed up with our appetizer, ate, laughed and visited. Then we played The Newlywed Game which Tony and I co-won the booby prize for. After 15 years together, you'd think we'd have gotten more questions right. I was just a little disappointed when the booby prize didn't consist of actual "boobies". Sigh. 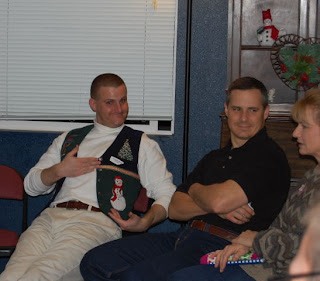 After the sad loss in The Newlywed Game, Tony did us proud by winning the ugly sweater contest. It was actually a woman's vest that I had maybe planned on wearing that Tony acquisitioned to wear instead. I'm not sure if it was just the ugly part or the skin-tight part, but we won a $1,000,000,000 candy bar prize. Hence the Austin Powers pose. 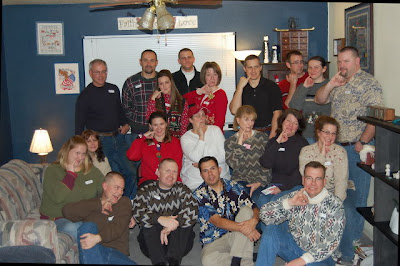 Thanks for the great time, Nicole and Phil! 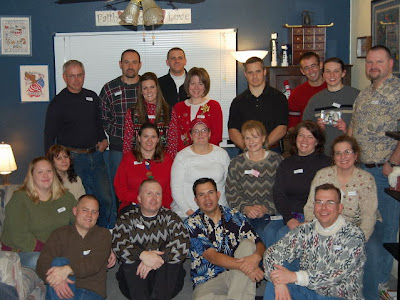 What a fun party idea--ugly
Christmas sweaters! Glad you
had such fun. No wonder Tony
won the prize----truly awful!

wow I am so sorry that we moved and missed the party. We really had fun last year.

That is funny. From the looks of things Tony did have on one ugly sweater. Last week I was in the PX and in walked a lady wearing the exact same Christmas sweatshirt I wore like 15-20 years ago...one of those with all that puffy paint on it.