The Tale of Lefty 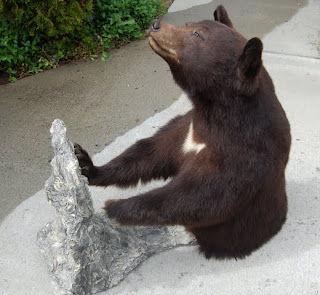 Last July my parents came for a quick visit to Spokane before my dad got too sick to travel. My dad (and Tony) both loved Northern Washington and I think my dad would have chosen to retire up near Colville, Washington. While he was here, he took a trip to visit Colville one more time and say goodbye to the friends he had made during years of hunting there. He also had a bear he had shot on a previous trip that was a little unique. My dad was up in a tree stand and saw a bear limp into view. My dad was afraid it had been wounded so he shot it on his tag. When they got close enough to check it out, they saw that the bear had gotten his paw caught in a trap when he was younger, he was able to pull free, and the stump had healed enough that he could get around on it. Hence the name "Lefty". Lefty was being wall-mounted and my dad wanted to check on its progress and take it home with him to Alaska. Well, the taxidermist in Colville was moving slow and the bear wasn't quite ready, but he promised to meet my parents at a parking lot near the airport and bring the bear in time for their flight. But when he showed up, the bear wasn't packaged...just laying in the back of his truck. My dad wasn't happy. So the bear came home, temporarily, to our house. We checked all over to see how much it would cost to ship Lefty to my dad in Alaska. Come to find out, it would be cheaper to BUY A DAMN AIRLINE SEAT for Lefty than to ship him to Alaska. As my dad got sicker and sicker, it was the one little joke my mom and I were able to share. I had Lefty, but I didn't want Lefty. My mom didn't have Lefty and she didn't want Lefty either. "Possession is nine tenths of the law" she kept saying. And as much as I really didn't like Lefty, I got a little sentimental about him. After my dad passed away, Lefty became a reminder of the last time I saw my dad. Although I'd rant about how much I didn't like Lefty, I maybe liked him just a little bit. 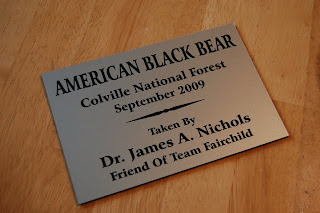 So now we are getting ready to move next week. Lefty is heavy. Lefty is big. And I didn't really have a place to mount him ON A WALL in my new house, so we decided to find a new home for him. We learned you can't sell him at a garage sale (although one guy tried to buy it out of our garage) or sell it on Craig's List...it has to be gifted. So Tony did a bunch of paperwork, and we gifted Lefty to the base. He is a local bear, after all. So he has been sitting on a credenza in the legal office for the last week waiting for a plaque to be finished...that was my one stipulation about gifting Lefty. I wanted to have my dad's name on him somehow. Late this morning, Tony brought the plaque by the house so I could see it. I love it. And after all this, I love Lefty. I will kinda miss having him around to pretend to aggravate me.

But he will be loved here.

What a tender story...no better place for lefty.

I love that story too. I am quite sentimental these days, and I love that he stays there. It seems fitting.

such a sweet story! you have done both lefty and your dad proud!

What a great story! Thank you so much for taking the time to share it on your blog.

So cool. I'm sure your dad would have loved it.

How sweet. I'm sure your dad has the biggest grin!