While we were at my sister April's house in Utah for baby Rock's blessing this Summer, my other sister Megan was there visiting from Boise. She is a dietitian and a fabulous recipe finder. She had made this pie for dinner the night before and told me to try a bite. A bite, my heck!! I snarfed down what was left of the pie standing by the fridge right OUT OF THE PIE PAN. So I made it for my family tonight. But don't make it on a Sunday you are fasting. Just a suggestion. It is a little like Chinese water torture. 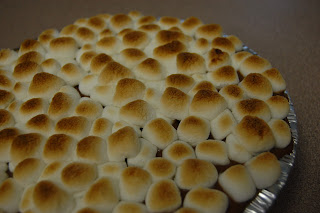 In a medium bowl, with electric mixer, beat cream cheese till creamy. Add whipping cream to the cream cheese and beat on high till mixture is thick, then reduce speed to low and beat in Nutella, just until the mixture is incorporated together. Pour the mixture into the graham cracker crust. Place the mini marshmallows over the top of the pie, making sure they are close together and all the chocolate mixture is covered up. Pre-heat broiler with the oven rack on the second slot from the top. Place the pie under the broiler and broil till the marshmallows are golden brown. DO NOT TAKE YOUR EYES OFF THE PIE AS IT BROWNS, BECAUSE THE MARSHMALLOWS WILL BROWN IN LESS THAN 2 MINUTES. Turn the pie around in order to brown it evenly, if necessary. Refrigerate pie for 3 hours, before serving. 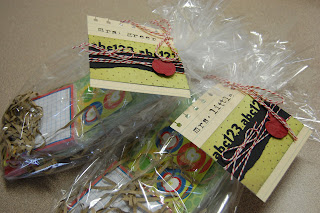 Tomorrow is the first day of school for the big kids. I have to admit that I'm freakin' out a bit. We are still getting used to the area and they will be attending different elementary schools. Having them both away from me all day, in a new place and having them in DIFFERENT places is really throwing me for a loop. I'll be wringing my hands and pacing the floor tomorrow until they get off their buses after school. But with these little gifts and homemade tags (Martha Stewart apple punch and ABC border punch) at least I'm be sending a clear message to their teachers: "Here is a teacher's gift celebrating the first day of school. Be nice to my kid, and there's more where this comes from. Be mean to them and I'll beat you up."
Posted by Amber M. at 8:42 PM

Ha ha ha....I love the "beat up" part! I bet they'll LOVE it! Your kids will do great, because they have such a GREAT mom!!!

my kids start next week. Max is starting high school. He started shaving last month. I am freaking out my baby is not such a baby anymore. I am glad I still have a two year old Kira running around to make my feel young still. Good luck with the new schools. In time you will love being in the south. I have always loved living in the south. We love it here in TX.

Can't wait to try that pie!

it 's times like this I'm really bummed that Grant is allergic to ALL nuts. Oh well, take an extra bite for me :-)

Hi, I'm glad you Love this pie. This is a prize winning recipe of mine from a Taste of Home contest. It's funny you tried it while in Boise because that's where I live! Enjoy!