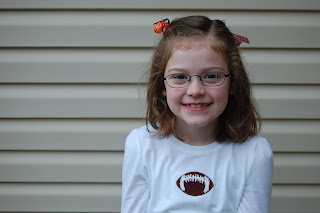 ...or in other words, "How to keep your kids from getting beat up during Iron Bowl tailgate parties." That's right. The annual Auburn/Alabama knockdown is the weekend of Thanksgiving. And because the kids have all next week off, that leaves this week for the Autauga County school district to tailgate. Seriously. Our family has tried very hard to stay Alabama neutral so as not to immediately alienate half the state (or the other half) with the official McIllece family backing. 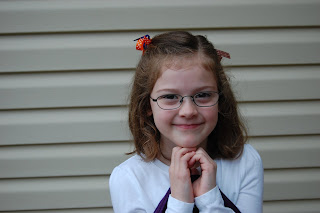 Today for Anna's tailgate party, I made her a cute, generic football shirt. And she decided to wear Auburn blue & orange in one pigtail and Alabama crimson in the other. And notice the darling new glasses!

We also got some great news last week. We will be staying in Alabama for at least two more years after Tony graduates from ACSC in the Spring! He was offered a staff judge advocate job here at Maxwell...a great opportunity for him. I'm thrilled. We waited to tell the kids that we would be staying until everything was finalized. We thought they'd be excited. Instead, we were met with silence. And then Sam said, "What does that mean, exactly?" That's what you get when you have a 5th grader who has attended 5 schools. Geesh.
Posted by Amber M. at 8:07 AM

alabama sure is lucky to get you guys for two more years! (and emily would be so jealous of anna's glasses! she broke down in sobs when the dr. told her she didn't need them :-) .)

Sounds like you get to put down some roots there! It sounds like a good opportunity! If you're happy, so are we!

I LOVE little Anna! The glasses, we noticed right away! Adorable. And I love the "neutral" team attire!

Hope you have a great holiday!

Love the new glasses (she is looking so much like you Amber!!) And so so exciting about staying in Alabama. Glad you are excited about it and happy you won't be having to uproot again so soon.

Love your Switzerland idea! We are an avid LSU fan and our middle son (age 5) decided this year that HE likes LSU AND Alabama (b/c of a video game). Needless to say, he was upset when Alabama lost to LSU and he is happy we might have a rematch with them in a few weeks.
Have fun watching the iron bowl...I'd pick Alabama ;)