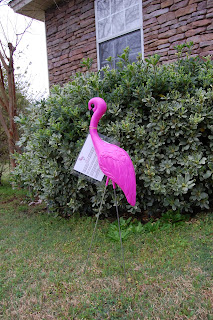 ...apparently about ten bucks.
Yesterday the kids were out shooting baskets before piano lessons. Anna came running in and told me there was a flamingo in our front yard. My first thought was "No, there's not." I mean, I didn't put any flamingos in our yard. And it couldn't have been a real LIVE flamingo, could it? But general impression, I didn't really believe them. Until I went to see for myself and, well, there was a flamingo in our yard. I giggled all the way to piano lessons, I think because it was so unexpected and bizarre.
Turns out it is a fundraiser for the Prattville High School cheerleaders. As I've stated before, football is HUGE in the South. And Prattville has a very rich football heritage and is consistently nationally ranked. Last year, they played on ESPN. So as part of that heritage, I now have to pay $10 to have the flamingo transferred (via Prattville cheerleader) to another person's lawn.
I have never heard of this before, but Tony says he did a legal reveiw of it for Fairchild. Clearly, I somehow missed the bright pink flamingos in everyone's yards during fundraising season! But we love having Sal (that's right, we named him Sal) in our front yard. For now. But watch out! He could show up in your yard next... 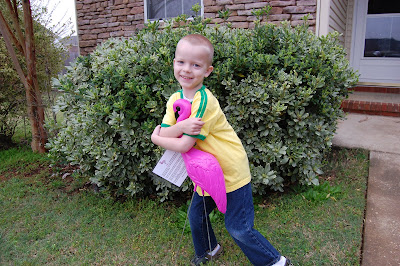 I am so happy Sal got a name and some lovin'.I love that the kids got a kick out of him!