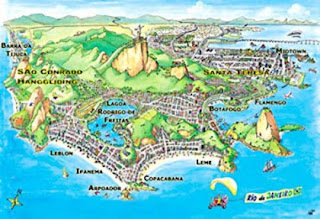 We had intended to ride the tram up to Sugar Loaf on our third day in Rio, but it was overcast so we decided to skip it and enjoy the beaches instead (I'm including a map for easy reference...aren't I a thoughtful blogger?). Our hotel was at the far end of Copacabana Beach, almost to Leme, which is on the right side of the map. We walked the entire length of Copacabana, cut across the peninsula, and then walked about halfway down Ipanema. Pretty far! 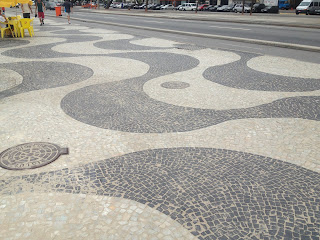 I've already posted some photos of Copa-
cabana, but I wanted to include a picture of the mosaic cobblestone sidewalk along the beach. I fell in love with these mosaics...especially after seeing the wave of the pattern from our hotel room window. Later, our tour guide in Salvador told me that this is an influence from Portugal. 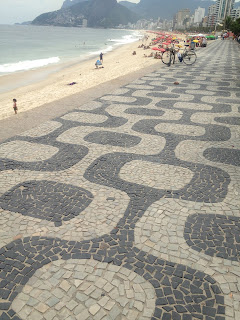 Here are some photos of Ipanema Beach. Also very gorgeous. But the fun thing is that Ipanema has their own mosaic pattern that runs along it's sidewalk. Cool-60's-Retro-Portuguese-Brazilian (I just made that up, but I think it might catch on!). 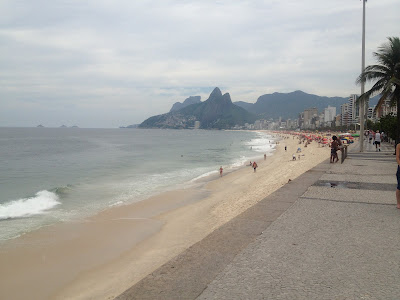 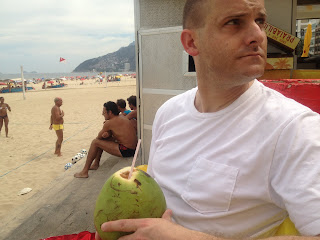 About halfway down the beach, we stopped to get a coconut and some Guanana and sat down at one of the little cafes along the beach. Ipanema is quite a bit narrower than Copacabana so we were right up there in the action when a bunch of old guys in tight swimsuits and a lovely young Brazilian lady decided to play volleyball right in front of us so we sat down to watch. They were actually playing FUTBAL volleyball! They only used their feet and bodies (NO HANDS) and we were so impressed! 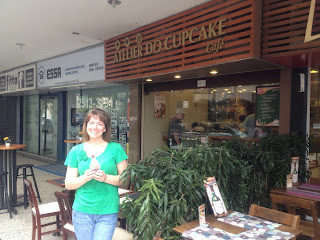 When we got cooled down a bit, we started the walk back to the hotel. Right at the tip where the two beaches meet, I spied a cupcake shop! We stopped just long enough to pick up a doce de leite cupcake and had it packaged to take back with us to the hotel. Yummers.

When we got back to he hotel, we were hot and tired. So we got cleaned up, took a nap, ordered room service for dinner and watched the sun set. We also got packed up for the plane trip up to Salvador the next morning...