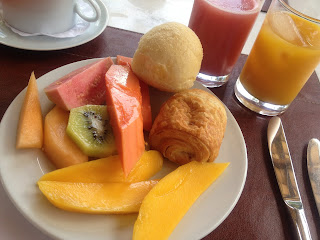 The resort where we stayed in Salvador had an inclusive breakfast each morning of our stay. Ho.Ly. COW! This was not some run of the mill complimentary breakfast! They had every imaginable exotic fresh fruit, traditional Brazilian breakfast breads, manioc cakes with coconut milk, pastries, and even some local breads from Bahia (the state where Salvador is located). 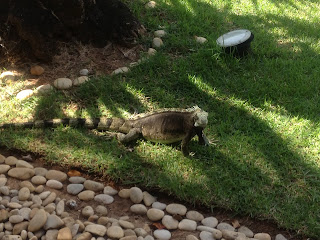 We loaded up our plates and ate outside on the veranda overlooking the lagoon and the pool. Just as I was sitting down at he table, Tony pointed out an iguana that I walked right by (obviously focused on my breakfast) and I nearly screeched. We saw 6 huge iguanas (and too many geckos to count) walking around the grounds and in the trees during breakfast. 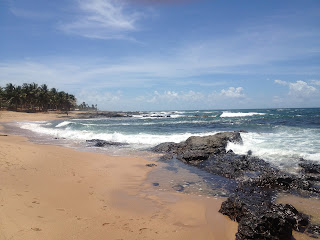 After breakfast, we changed into swimsuits and cover-ups and walked the 2 blocks to Itapua beach. What a beautiful beach! The sand was completely different than in Rio because of all the darker rock, but so beautiful. We saw tons of tide pools with little fish, snails, clams and even a crab who alternated between hiding in a hole so I couldn't get a picture and running at me like he was intent on eating me for breakfast. 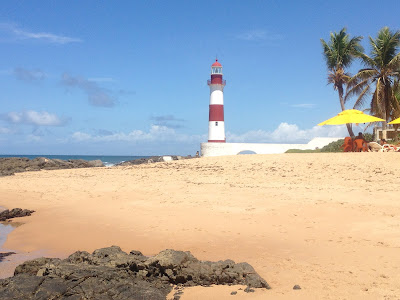 At one point of the beach, there was this cute lighthouse. I don't think it is used anymore, but it made for some really pretty photo ops against the blue sky. Along the side of the lighthouse were these two white stone arches and when we got closer, they framed the view of downtown Salvador beautifully. In Bahia, some still practice a sort of a hybrid polytheism and we found lots of candles and popcorn in the surf as the tide went out...obvious offerings to the goddess of the sea. 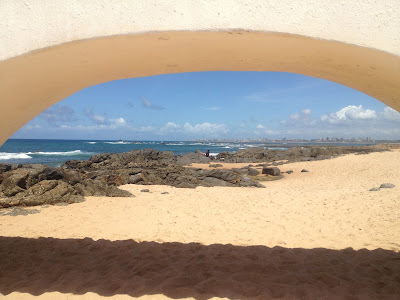 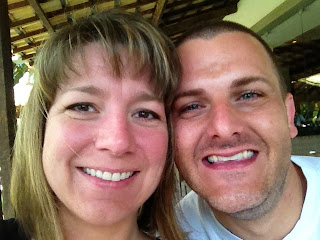 We stopped at a shop and bought some water, Guarnana and walked through the local neighbor-hood back to the hotel. We went out to the pool, and then took a long nap. Read, ordered room service, watched futbal, and played Angry Birds. Great day!!
Posted by Amber M. at 6:45 PM

Sounds so awesome. I must say, you two look so happy!