Anna the Klepto & Her Purse

It all started when my dad sent the two big kids wallets. They filled them with ID cards they made themselves, school pictures of each other, and pretend money. Then Anna asked for a pair of sunglasses because the sun was getting in her "eyelashes" when we were in the car. Then she asked for chapstick of her very own. Every girl has got to have chapstick. With all this new-found girl booty, she didn't have a way to keep track of it all...especially when she was on the go. 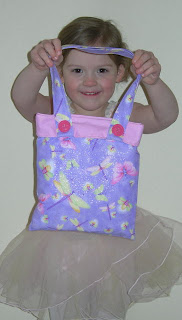 So last Friday, she and I had a girl's night out and she picked out some fabric and buttons so I could make her a purse. I used this darling tutorial from Cocoa and we were both very happy with the result.

That is, until things started going missing. Come to find out, Anna had been paying VERY close attention to the things that I had in my purse and decided that since she now had her own purse, she needed all those same things in hers, too. So, last night after she was in bed, I raided her purse. Aside from her wallet, her barbie cellphone, and 3 sets of Josh's plastic baby key toys, I found six tubes of chapstick, my digital camera, and nickel, a quarter, and the mailbox key.

We had a very long talk this morning about taking things that aren't ours without asking.

On a completely different note, last night I finished up a set of cards with some of my hoarded 7Gypsies paper. I needed some "just because " cards and this will fit the bill. I love the way they turned out. 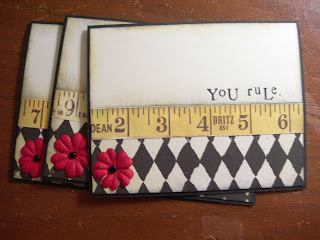 And last but not least, more good news. Tony got his line number yesterday and it looks like he will be pinning on Major before the end of the year...much earlier than we had anticipated. We feel so blessed.

Have a great weekend everyone!
Posted by Amber M. at 3:31 PM

What a perfect purse! You've got the cutest stories. I guess she wanted to be prepared for anything and have a "Mary Poppins" purse!

Okay you sew, you scrapbook...huh. Don't tell my husband. What else do you do COOK? GARDEN? Pshaw.

The purse turned out lovely! I think I will borrow the card idea. We have a card exchange going in RS and I think that card is amazing.

I thought that purse looked familiar =)

So cute how she wanted to be just like mommy.

i just love getting to know your family through your stories! your kids are just terrific. the cards are way cute too! how do you like the book? i'll be borrowing ilise's copy when she's done so i have yet to start.

My duaghter loves to fill up her purses with "special" things too. :0) IMitation is the sincerest form of flattery right?

Oh anna what a funny little nut. At least you know where to look if you lose something.

BTW those cards are so darling!
yes, 'you do rule!'

That purse is darling! We are all about purses at our house. You know, I have never investigated what they have in their purses. Maybe I should take a peek!

That is so sweet Anna got to pick out her favorite material. Her purse if so cute and I love the cards! It's still early tonight so I might try some cards like that

It is so great to hear stories about little girls and their purses, as we do not have any cute purses around our house except for mine since I am the only girl. How do you find time to be so creative? You are so awesome!

Your baby girl is so adorable! She looks so proud of her purse. And what is it with kids and chapstick? I swear we have about 20 sticks at our house, but do you think I could ever find one to use?
Love the cards!

those cards are cute! love em

Oh Anna, you make me laugh. The best is yet to come...

Agreed - my girls are obsessed with chapstick! Cute purse...even more cute is the owner of that purse. :) Amber - you amaze me! Great cards!

Such a fun purse! I am sort of glad Genna hasn't gotten into chapstick yet. She loves fingernail polish however and has a blast just playing with the bottles.

Love the card too!!