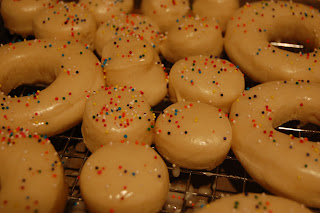 My friend Kristi pinned this baked donut recipe this past week and I knew I had to try it. So it was another epic head to head battle with yeast. But I won. And there was much rejoicing this morning...6 BIG thumbs up from the kids!

For the Cinnamon Sugar Topping:
*Enough to cover all of the donuts
½ cup unsalted butter
1 cup sugar
1 tbsp. cinnamon

To make the dough, place ¼ cups of the warm milk in the bowl of a stand mixer. Sprinkle the yeast over the milk. Let sit for 5 minutes. In a small bowl, combine the remaining ½ cup of milk with the sugar and butter. Add it to the yeast mixture. Stir to combine. Add the egg and stir until incorporated. Add the flour, nutmeg, and salt and stir until the dough starts to form. Change to the dough hook and knead until the dough starts to become smooth. If the dough is too sticky, slowly add more flour until it is no longer sticky.

Transfer to the dough to a lightly floured surface and knead for 5 minutes until the dough is smooth and elastic and has formed a ball. Place the dough ball in a large lightly greased bowl, and cover with plastic wrap. Let sit in a warm place for about 1 hour, until doubled in size.

Once the dough has risen, roll it out on a lightly floured surface until ½ thick. Using a donut cutter, cut out the donuts until you have no dough left. Place the doughnuts on a baking sheet lined with a silicone mat or parchment paper, about 2 inches apart. Cover with a clean towel and let sit for about 45 minutes. Preheat the oven 375 degrees F. Place the baking sheets in the oven and bake for 7 minutes, until lightly golden brown. Be careful to not overbake these. You want them to be light and doughy inside. Let the donuts cool for about 5 minutes until ready to top with either the glaze or cinnamon sugar topping.

To make the glaze, combine the milk and the vanilla in a small saucepan. Heat over low heat until just warmed. Slowly add in the confectioners sugar and whisk until the mixture is smooth. Dip the donuts halfway into the glaze and place on a draining/cooling rack set over a baking sheet. Sprinkle with sprinkles if desired. Let set for about 10 minutes.

To make the cinnamon sugar topping, melt the butter in a saucepan or a microwave, and place in a small bowl. Combine the sugar and cinnamon in a medium sized bowl. Dip the donut halfway into the melted butter. Then dip them into the cinnamon-sugar mixture. Set on a draining/cooling rack to set, about 5 minutes.

How do they compare to store-bought/fried?? I'm excited to try them!! -- Melissa @ hoping2grow