Okay, so I wasn't really on my death bed, but it sure felt like it for a day or two. Joshua was kind enough to share a nasty virus that had me running a fever of about 102 off and on for 3 days, complete with body aches, heat rashes and fever blisters in my throat. I'm feeling a little stronger every day and hope to be back up and at 'em bright and early Monday morning.

And in other exciting news, Tony managed to get a couple of tickets to the Nebraska/Missouri game on Saturday night at Memorial Stadium. Megan was kind enough to come up and watch the kids while Tony and I made the pilgrimage down to Lincoln, had a bite to eat, drove around the 'ole stomping grounds and took in the pre-show. We had such a great time...we have so many wonderful memories of happy times and close friends from our 3 years in Lincoln.

There really isn't anything like the energy in Memorial Stadium on game day. The lead-up, the tunnel walk, the first kick-off, the balloon release at the first TD, throwing the bones for the Blackshirts...it's infectious. Despite the poor Nebraska showing, we had a great time, enjoyed the wonderfully warm evening, and whooped it up with 85,370 of our closest friends. 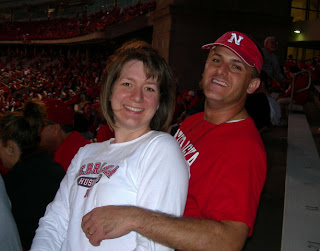 This is Memorial Stadium all the start of the game. Crazy. Don't let the occasional yellow confuse you. It might just be a foam corn head and not an actual Tiger fan:-) And despite the loss, it was really fun to get to see Missouri in action (wow) and be a part of the tradition that is Big Red football. 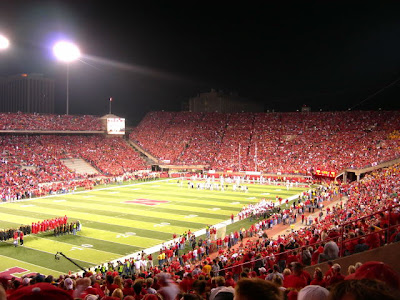 You lucky duck! I kept looking for you on the tv last night, whenever they would give a shot of the stands.
I HATE being sick so I feel for you.
My pumpkin cobbler is about to come out of the oven....can't wait.

I'm so glad that you are feeling better, it sounds like it was awful. Being a mom and being sick is no fun, there is no one to take care of you, I guess our hubby's do their best. I'm sad I didn't look at your blog sooner for the conference packet from deseret book. My kids would have loved that. I'm sad conference is over, it's always so nice to be brought back into reality of what is really important.

wow! so fun! i've ALWAYS wanted to go to a nebraska game! glad you're feeling better :-).

Dave and I, definitely, have going to a Nebraska game on our list of things to do before leaving this area. We were in Lincoln a few weeks ago and were amazed at all the fans in red all over the city. Hope you are back to good health!

So fun, I'm glad you were feeling up to going! Looks like a great time. Sorry they lost, GO BIG RED!

What good times! It sounds thrilling. Theres no fans like NEbraska fans!

I was totally just giving you a hard time about OPI...no hard feelings :)

I'm telling you, there's nothing like a college football game... especially Division I ball. We made it back to my alma mater, Iowa, last year for a game, and it made me want to move back there just to experience football season!

I'm so glad you're feeling better! Sorry about the loss but glad you had such a good time at the game.

Ahhhhh, we're so jealous! This is the first year that we haven't been aable to come back for a game, and we miss it! You are so right about the stadium, fans, energy...we love it! We're so glad you were able to go. Hope you get feeling better!

I'm glad we didn't get close to you guys at the book fair or I would be worried that I gave you our bug. Darn it! I hate cold and flu season. I went to a Nebraska game back in 2004 when they played USU. I think I was the only one in the entire stadium dressed in blue and man did I cheer the couple of times that USU did something great. It was a very lonely game for me but when you are true to blue what ya do? :)

Looks like it was fun...we watched it on T.V. but had a hard time choosing who to root for...seeing as we now have lived in both states! sorry to see that Nebraska got blown out...so by the end of the night I guess we were cheering for Missouri...what else could we do?

Sorry you were sick. :( So Barry and I went to the last game (Virginia Tech). It was my first Husker game and it is quite the big deal down there. :) We had a great time. Glad you guys had fun too.

Glad you guys made it to a game! It is such an experience!

How's your week looking? Have anything going on Wednesday?

'Tis the season for flu and football, huh?

Oh no. I hope you feel great all week long and no more sickness this winter. Once is way more than enough. Not fun or good. Did your hubby spoil you rotten though? Hope so! Glad you guys had fun at the game! Happy week ahead~ Les

glad you are feeling better!

Glad to see that you are feeling better. I just think as mothers, we are not allowed to be sick!

So glad you are feeling better. I remember trying to drive through Lincoln on a game day once. Crazy! I love football season! And the picture of all the RED fans!

We live in Lincoln and we love Nebraska football! It looks like you had a great time at the game!