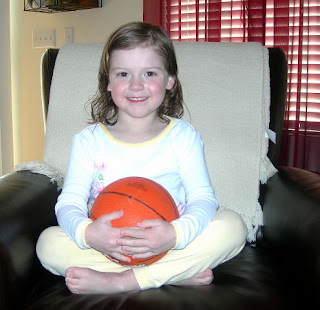 Just in...until March Madness rolls around again, the McIllece Bracketology trophy will hold a place of honor in our home. Good thing, because after two wins in three years, Anna really considers it "her" trophy. I must admit, it would have been a bit more fun to have it coming home to Nebraska if Donny hadn't been such a dang gentleman about having his bracket handed to him by a 4-year-old...with a little help from her daddy.

This is a very, very big deal. We have an official commissioner. We have our own rules. We have our own scoring system. We have a traveling trophy, AND the plaque that bears the winner's name for posterity. We have a blog. We even have a "control" bracket completed by which team's mascot is the most ferocious and capable of taking a fight. AND, we have the trash talking. Seriously. And we look forward to it every stinkin' year. As always, thanks so much for the fun!!
Posted by Amber M. at 6:18 PM

Dug would be soooo jealous of your home! He doesn't even mention brackets or the games to me since he knows I REALLY don't like sports. That probably should/will change since I have a little boy now who can only say BALL.

congrats' anna! that's such a fun tradition to have too--i love it!

A trophy? Wow! I might have to pass that along to the higher ups around here! :0)

Sounds like you guys get into it.
I love the traveling trophy.

that is so sweet...we love it as well. I wish we were as die hard.

Very fun tradition. She is stunning!

Yeah for Anna!! I'm so happy she won--she's so adorable holding that basketball. Give her a big hug from her Uncle Russ and Aunt Becky!

Ok...So I'm thinking that this weekend we could have a trophy exchange ceremony! What do you think? May have to pry it out of Donny's frigid phalanges but it would be a great photo op! Can't wait to see you hope your travel goes smoothly!