Since we moved to Omaha last summer, I have been at war with the local city library. Usually, the library is one of my first discoveries in a new town. In fact, the library and the local Target are what I consider our personal "McIllece Family Welcoming Committee." But not this time. Our home is in a very new development, and because we technically haven't been incorporated into the city limits, we have to PAY A YEARLY FEE in order to check out books. From our local library. Scandalous. How much you ask? $30. But its the principle of the thing. So I decided to show them. We've lived here for 8 months and 4 days and I have never been inside the Sump Memorial Library. I even grunt and shake my head in disgust when I drive by.

But after some major soul searching which included a realization that I have easily spent five times the yearly fee by actually having to purchase books to read, being desperate enough to re-read Madame Bovary for the sixth time, and knowing all the local Border's employees by name, I finally bit the bullet. Slunk in the door, wrote the check and got my very own library card. And checked out four books for me and one for Anna. 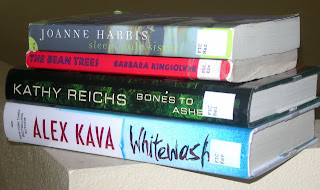 When we lived in Helena, Mt we had to pay to join the library too. Because the one in our county was way further away than the one in the next county. I hated to have to pay to use the library. I had to paid something like $80 a year, but I too broke down and paid. In the end it was worth it.

I feel your pain- it's $12 a quarter in Lincoln and $14 a year for Nebraska City. I just got done reading The Bean Trees this week, after I coughed up the $12 to do so.

I'm jealous. Real books? That you hold? And the pages turn? My sad, neglected books are jealous. I really need to put down the laptop and read my loving books. Just wrote about this yesterday.

In defense of libraries, the reason you are having to pay for what should be a free servive is that more and more libraries are finding their budgets being sucked dry because property owners are not voting in favor of tax increases that would continue to keep the libraries afloat. Why? Because most people do not see the value of libraries. Those that do "get it" though, are finding them short changed -- literally.

Alex Kava has a new book? I just might have to buy it :-). While my library is free-they don't really purchase new books. So I often find myself buying all the new releases. Thanks goodness for B&N free shipping on $25 orders.

Wow, I've never heard of having to pay to use the library! Our county library is great. We get a bookmobile that comes straight to our house every other Monday. I guess I never realized how lucky that is!

So glad that you finally made it to the library, sorry that you had to pay. But there are a lot of benefits you will find going to the library, especially visiting Ms Sandy for story time, one of our most favorite things to do.

ok, you wanna know a secret? I just put my in laws address down so I didn't pay the fee. The same thing happened to us when we moved to our house and they said that I was to go to the Omaha library. Umm..that's like half an hour from my house! So I just lied a little. I feel guilty every now and then....

hi-larious, amber! i'm sorry that you have to pay...i'm sure the new subdivisions will be included soon and it'll be free for all :-). take josh to lapsit with ms. sandy sometime--she's worth the $30!

ps i can't tell you how much you're my favorite person every time christian 1. goes down for a nap or to bed and 2. stays asleep!!!

pps early bedtimes (before 8) are definitely the way to go!!! thanks again....!

Oh, you totally showed them!

I had to stay away from any public library for 4 years (after paying $65 in book replacement fees). For some reason my one son thought books were yummy and my other son loved the sound of paper ripping.

I know what you mean though. It's ridiculous. If your address includes the name of the city, shouldn't it be considered PART of the city? You'd think!

Oh I love it! I wish I could say thats why we live where we do...just for the free library card. But seriously who charges any amount of money for a card!!! I thought that was the point of a library. Glad you caved though, although I have to say I love BUYING books even if I do only ever read them once.

oh and P.S. whatever you did to help kathleen with sleeping children I am going to be needing some serious assistance in about three weeks....so keep me in mind!!

Someday I'll tell you about the not so nice conversation I had with the ladies at the library over my $30 fee.. not one of my finer moments!! Glad you relented! We'll have to meet up for story time, Ash loves the big girl story time (they can go on their own) and all you've heard about Ms. Sandy for the little ones it true... she's wonderful!

I fell your pain only I feel the same about the four little "blessing's" that are the
boss at our house...

I feel your pain. In Saratoga they wanted $100 from us to use the Lehi library. GRRRR. I protested and have purchased a few myself. I see you have Bean Trees. Loved it. When you are done follow it up with Pigs in Heaven. Barbara Kingsolver is a new favorite of mine. Also just finished Pride and Prejudice-swoon-Jane Austen is a gift to women.