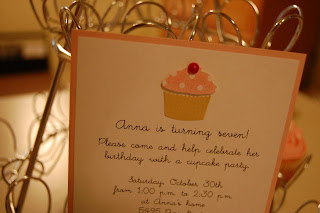 Today was the big day! This was Anna's year to have a friend birthday party, and because her big day comes so close to Halloween, we try and make her parties as girly and frilly and fun as we can make them. After some major brainstorming, we decided that a cupcake birthday party would be just about perfect. First, I made her invitations using Martha Stewart's cupcake punch. 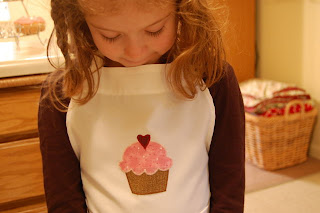 As each of the guests arrived at our home, they were given their very own apron which I purchased and then appliqued on pieced fabric cupcakes. I even finished the edges so they can be washed and washed and washed. They turned out so cute! 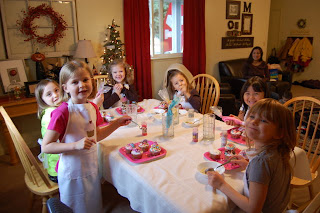 After everyone was here, they each had a place set for them at the table with their first cupcake to decorate. We had every type of sprinkle, topping, mini chocolate chips and four different tipped icing bags to decorate their cupcakes with. As they finished with one, they got another...they each ended up with 4 cupcakes to take home. 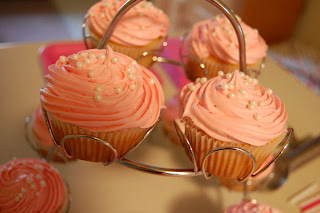 After cupcakes, we opened presents. After presents, we had cupcakes (on my new cupcake stand), ice cream and LOTS of giggling. Kinda comes with the whole "girly birthday" thing. Anna decided to have white cake cupcakes with pink frosting. The pearls were my addition. With Mint chocolate chip ice cream. Which would NOT have been my choice. But if you've seen Wicked, pink DOES go good with green... 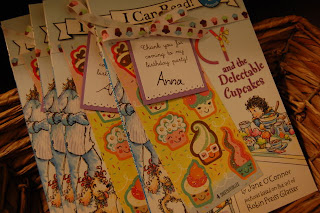 As each of the girls left, they got their cupcakes, apron and a Fancy Nancy and the Delectable Cupcakes book and some glittery cupcake stickers. When Sam had his Davy Crockett birthday party, we gave books away as party favors with coonskin caps and I loved spending the same amount of money on a book as I would on birthday goodie bag junk. So we did it for Anna's party as well.

And another birthday bash bites the dust.
Posted by Amber M. at 6:31 PM

anna's seven! holy cow! happy birthday, cutie! so glad you had such a good girlie time--yummers! i love the book idea too for party favors :-).

OK---after reading your blog tonight...Paul said you and I should go into the party business together! i LOVED all your darling, and very coordinated, ideas! Happy 7th Birthday Anna!!! Cute as ever!

LOVE your cupcake theme! It is so adorable... And those aprons are to die for!! Is there anything you can't do?? :o)

You are the best! Anna will have such wonderful memories! I LOVE those beautiful cupcakes...all of them. Shoot...I'd like one of those aprons.

very cute party! kateri had a butterfly party this year, and we tried to find Fancy Nancy Bonjour Butterfly books for all the girls to take home, but finding them in paperbook was a no go. :(
Courtney