This weekend was monumental. On Thursday, Donny, Dave (two of Tony's brothers) and Z (Dave's son) arrived in Spokane to go on a deer hunt with Tony and Sam. It was so fun to have a house full of McIllece boys, but a little bittersweet because this is a hunt my dad was supposed to go on. Sigh. The best part about these guys?? They were a JOY to feed. They loved everything I cooked. 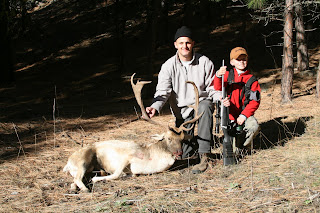 But on with the story of blood and butchery! On Friday morning, the boys woke up early and drove north of Spokane to Colville, Washington to a private ranch that offers fallow deer hunts. I chatted with Tony about 10:00 that morning and he already had shot his buck, but they were all having a blast and seeing all sorts of animals and even getting some good chances to shoot. They finally wandered into the house about 7:00 that night. And oh, the story they had to tell. Z was the only other hunter to actually shoot a deer, a really nice symmetrical buck. BUT he was such a great shot that he actually killed TWO deer with a single bullet. I kid you not. A doe was snuggled up to the buck that Z shot and so the bullet went through the buck's lungs and into the doe's lungs but didn't quite have the velocity to go all the way through. So Z was able to find and keep his mangled up bullet that took out two deer with a single shot. Nice. And welcome to Washington. 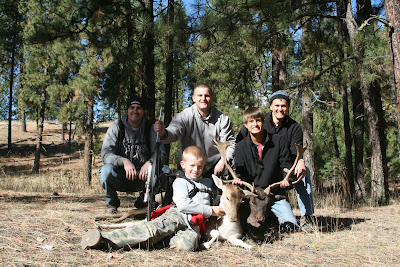 (This is a picture of all the guys and Z's two deer. Tony's was already being processed.)

This is the photo I took of all the McIllece boys that were at our house this weekend. What a handsome group they are!! 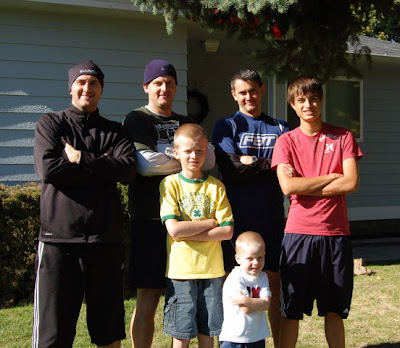 This reminds me of the time our two boys and hubby Dave drove to Pennslyvania to go deer hunting with his twin brother, Don. He lives in the Northeastern side of Pa. No deer shot this time, but we had a great time. We lived in Ohio at the time..
Looks like the fellows had a successful day... One shot and 2 deer... That would make the excitement for the day and for a lifetime of memories.
Good looking boys...~!

Ha...look at big bad Josh down in the front!

What a bunch of handsome men.
Glad the hunt was successful
and fun!

Josh is too adorable!

Ah, I love deer hunting season...so manly, and yes, I do love venison. Ok so what lucky guys to have you cooking for them...how could they not love your cooking.