Our ward in Montana handed out the coolest thing to the fathers last year on Father's Day Sunday. 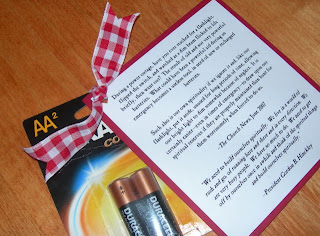 It was a 2-pack of AA batteries with this great message from The Church News and a quote from President Hinckley:

"During a power outage, have you ever reached for a flashlight, flipped the switch, and watched as a dim beam flicked to life briefly, then went out? The result of old and not very powerful batteries. What could have been a powerful aid during an emergency becomes a useless tool, in need of new or recharged batteries.

Such also is our own spirituality if we ignore it and, like our flashlight, put it aside, unused for long periods of time, allowing our bright light to dim somewhat because of neglect. It is certainly easier—even in times of emergency—to draw upon our spiritual reserves if they are properly maintained then hunt for them worrisomely when forced to do so."
--The Church News, June 2007

I wanted to share it because I thought it was a really great idea...as much for the ladies you visit teach as well as the special fathers in your ward family.
Posted by Amber M. at 7:55 PM

I'm totally using this for VT! BTW, I love your new blog header. So cute!

really wonderful! "they" (whomever is in charge of this stuff) should definitely do this for our ward! great idea.

Oooh. what a cool idea. I love it.

That is such a great idea! And everyone needs batteries, or at least we do with all the toys that die. Oh and the pizza, I have been craving it, so looks like I am going to have to try making it now. Thanks for sharing!

That is such a good one. Thanks for sharing since I missed it!

You have such great ideas to share! I love it.
Holly