Toads Are Our Friends

When we finished the addition of a guest room/bathroom in our basement last fall, we had to dig out an egress window for the bedroom to satisfy city code. Since Sam loves to sleep down in the guest room when we don't have company, we added a ladder for easy escape should the need arise...the window well is about 4 feet deep. 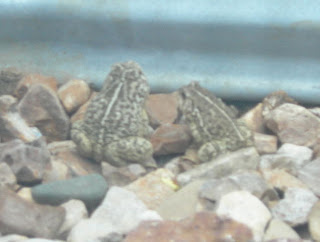 This Spring, we have had a couple of animals fall into the window well and get stuck. The first was a baby bunny (so cute) and despite his frustration over the rabbits eating his vegetable garden, Tony gave in and helped the baby bunny out of the window well. But only after the kids had named it "Peter" and fed it lettuce and carrots. 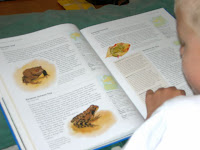 This weekend, Sam announced that there were two toads in our window well. And after consulting his book of animals, he concluded that they looked the most like common toads. Whew. I was worried they might be uncommon vampire toads.

So last night, Tony played the hero once again and used Anna's $1 butterfly net from Target to rescue the toads from the window well. 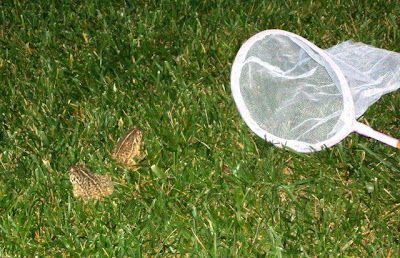 I'll be examining Tony for warts for the next few weeks, be assured of that.
Posted by Amber M. at 11:39 AM

Oh those are cute. I would love to switch for some live toads...About an hour ago my kids came flying in from the backyard, "MOM YOU HAVE GOT TO COME SEE THIS!" They said there is a squirrel out there by their 2nd base not moving, looked like it was taking a nap. So of course I go out there because squirrels don't take naps where little kids can watch. Yep, he is dead. Ben is so confussed because there isn't any blood anywhere. They are still questioning the nap thing, but I keep telling them I am 100% sure he is dead.

Toads must just like window wells. While I was watering my garden today I found a large toad sitting in ours. It freaked me out a bit because it's coloring reminded me so much of a snake. Connor was gone at the time, otherwise I am sure he would have been asking to keep him as a pet.

Could have been worse, my snake could have made it up to your house. Toads I can live with (warts too).

I just found a Yellowjacket nest in our window well... Toads are a lot more fun! ;)

But did he see what happened when he kissed one?

Those are such cute little toads. I will have to get with you about those windows, I have some questions.

Well thank goodness they weren't vampire toads. I hear they're quite vicious. :)