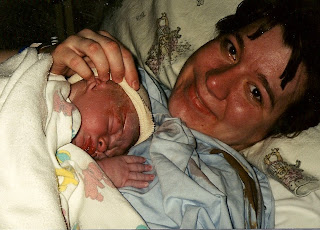 The entire day of Sam's birth is a blur to me. My labor was short (about 3 hours) and I remember events in small segments. I remember sobbing as he was born and asking if he was really a boy. I remember calling my father and telling him that after raising four daughters, his first grandchild was a boy. I remember him crying when I told him we had named him Samuel James (James is my father's name). I remember being a bit worried that Tony seemed a little hesitant to pick up and hold our new baby. That is until the next morning when I got out of the shower to find Sam in Tony's arms, watching the first of many football games together. His birth seemed especially miraculous, I suppose in part because he was our first. 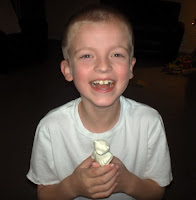 He continues to be an absolute delight. He is a kind, sensitive soul, a creator, and an awesome big brother. Happy birthday, big guy!! We love you to infinity and beyond! 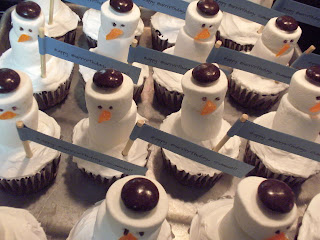 Here is the first part of Sam's birthday extravaganza!! These are the cupcakes I made for Sam's class...the idea is from Martha Stewart and I added a little flag that says, "Happy Burrthday, Samuel!!" We'll have more to post after this weekend's highly anticipated Davy Crockett party. Whew!
Posted by Amber M. at 11:40 AM

Amber those cupcakes are the coldest in the world. The kids I am sure loved every lick! I can just imagine how excited and proud Sam was taking those in to share with all his friends.

Darling cupcakes for one of the sweetest kids I know!! Happy Birthday Sam!

I love those cupcakes! Once again, you amaze me. I sent candy canes to Kaitlyn's class for her birthday. If only I had the energy to cook like you do. :)

Happy Birthday to Sam! Super-cute cupcakes and sounds like an amazing birthday party as well.

Those cupcakes are adorable, of course! Happy Birthday Sam

I LOVE THE CUPCAKES THAT IS SUCH A CUTE IDEA. I WAS JUST ONLINE LOOKING FOR SOMETHING TO MAKE FOR EMMA'S CLASS NEXT WEEK. HAPPY BIRTHDAY SAM!!!!

Your parents couldn't have picked a better name.

Those first birth experiences are so sweet. Oh, your post brought tears to my eyes.

What a lucky class to get those creative cupcakes!

Hi Amber~
Those cupcakes are adorable! The kids in his class will love them! I hope his birthday party goes well this weekend! Happy Birthday, Sam! :)

You had me in tears! There is nothing so magical as becoming a mother for the fist time. Well, maybe the secong and third.

Happy Birthday Samsonite! We love you and Baby Breea cannot WAIT to meet you SOON!

Hope you had an awesome day!

Happy Birthday Sam! You are such a handsome young man and we are so exited to see you in a couple of days for your baptism. We love you buddy!

happy birthday, sam! you are such a sweet guy :-).

amber, i just love the absolute radiance in your smile as you're holding your first little miracle. it makes me get all teared up. you can just tell how wonderful you were feeling that day (it makes up for the blurry memories!)

What a precious son you have! And those cupcakes are about the cutest thing I've ever seen! Hope Sam had a very happy birthday.

I remember getting his cute little birth announcement and being SO HAPPY for you and Tony. He sure sounds like a great boy, Amber. Happy birthday, Sam!

Happy Birthday a little late Sam! I remember receiving the call of his birth. It was a wonderful day and he was a blessing to your family. He looks so cute and has grown up to be a fine little guy!

Luv your cupcakes...soooo cute! You are so dang creative and the party....so fun for those boys!!!

Hope you have a great vacation!

Happy Belated birthday to your sweet son!
I stumbled onto your blog from somewhere *do I look Lost??? LOL*
and enjoyed your crafts and LOVE LOVE LOVE those snowman cupcakes!
I would love to make these for a scrapbook retreat I'm going to! I wondered if you could tell me what you used for the lil noses, tho? Thanks!
I'm bookmarking you and will pop in again sometime!
SherryB in AZ