Pretty Much the Weirdest Day EVER

This morning, I had my last appointment at Spa Paradiso before our move. I headed downtown to the gorgeous Davenport Hotel...the spa is in the basement. Just as I hit downtown, the traffic turned crazy, there were pedestrians all over the place, and I couldn't find a parking spot anywhere. And then I remembered. It is Hoopfest weekend when they set up 3 on 3 basketball courts all over downtown Spokane and the 200,000 people hanging out there to play and watch the games turns it into pure.mayhem. Of course, this all comes to me the second my front right tire blows and I start driving on my rim. Did I mention that there was no place to park? Anywhere? So I illegally parked as out of the way as I could and ran the two blocks to the Davenport and asked the valets to let me park my car there...I was going to the spa so I didn't feel like too much of a smuck (like some weirdo there for Hoopfest looking for a great parking space). They told me that I could park and they would hold the car there until Tony could come and change the tire. So I ran back to my illegally parked car and very slowly and carefully drove the 2 blocks to the Davenport's valet. And during that 2 block drive, there were at least 10 guys gesturing wildly that I had a flat tire. Like the WHOMP! WHOMP! didn't give it away. Geesh. I called Tony and told him where the car was so he could come rescue me (on his birthday, no less) and I make my spa appointment. But this is where it gets really weird. When I came out of the hotel, Tony and Sam were just finishing up the tire. As we were standing there, this guy walks up and starts talking to us, telling Sam how cool it was that his dad was teaching him how to change a tire and we started chatting. Tony looks up at me and says, "You know you're talking to somebody famous, don't you?" And totally "celebrity suave" me turns to the guy and asks, "Who are you?" Seriously Amber? The guy just laughed and said, Oh, I'm nobody, really." 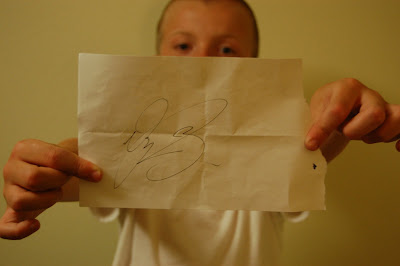 Tony asked him for his autograph for Sam and I start to really freak out. Turns out, it was Nate Robinson who played for the Knicks, the Celtics, and now for the Oklahoma City Thunder. Perhaps his stature threw me for a loop...he is only 5'8"...I'm taller than he is! He is also the only guy in NBA history to win 3 slam dunk contests. The guy has like a 44" vertical. So I went home with a new tire, my legs newly waxed, and an autograph from a guy I didn't even recognize. Pretty much the weirdest day. Ever.
Posted by Amber M. at 11:47 PM

Sorry about the flat though. :-(

Ha! That's funny. I don't know that I could have picked out Nate Robinson either because I don't follow the NBA really. Had it been Jimmer Fredette? Different story. ;)

Hey so that Jimmer Fredette is going to the Sacramento Kings...our new hometown team.

Ha, that is so funny, what happened.

Madi loves the color purple and on our last shopping trip to Osan, she got Nate's college football jersey.