A great recipe I found in October's issue of BH&G. Fast to make and PERFECT for the cooling weather! Let me know what you think...it scored HUGE at my house. 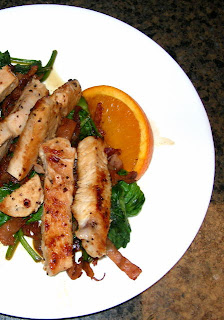 Season turkey with pepper. In very large skillet, heat butter over medium-high heat; add turkey. Cook 12 minutes or until no longer pink; turn once. Remove turkey from skillet. Slice into strips and cover to keep warm. Add ham to skillet; cook and stir 1 minute or until heated and starting to crisp. With a slotted spoon, remove from skillet. Add orange juice to skillet and bring to a boil. Add spinach, half at a time, to skillet and cook for 1 minute or until just wilted. Add orange wedges with second batch of spinach. Using tongs, remove spinach from skillet; divide among plates. Sprinkle with salt and pepper. Top with turkey and ham. Drizzle with remaining juices from skillet. EXCELLENT!
Posted by Amber M. at 6:56 PM

Yum! Sounds delicious! Must give it a go ... my boys aren't big on spinach, but maybe they'll go for this. :)

I loved your post about sweet Joshua. He is blessed to have YOU as his mother. What a darling boy - I can see why you are all so crazy about him!

I LOVE how Anna and Sam hold hands ... such a special bond. There is nothing sweeter than seeing siblings who really like each other!

I'm glad you liked my reading idea! You can add a link to my blog too if you want, that would be fun, huh? Loves!