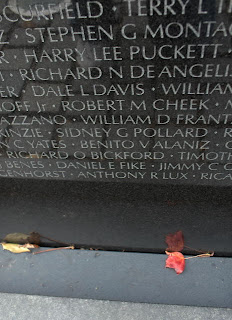 On Wednesday after the Holocaust Museum, I walked back to the Mall. I started at the Washington Monument and the did a huge loop around, visiting all the Memorials. Maybe it is our family's military heritage, both past and present, but these memorials symbolize more to me than the ultimate price of war: a gratitude for the willing sacrifice of these men and women for something bigger than themselves.

This was the first time I have seen the WWII Memorial. A fitting reminder of "The Greatest Generation." 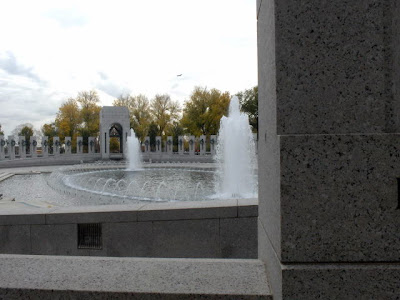 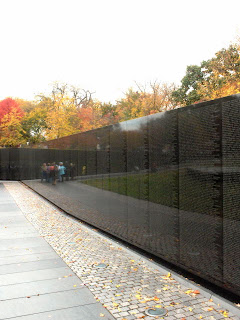 As I approached the Vietnam Wall, I saw two men, pacing back and forth across the sidewalk that leads to the Memorial. Heads down. Obviously working through their minds and hearts, trying to decide whether to take that step. I can only imagine the pain of these men, visitng a place dedicated to such misery and loss. 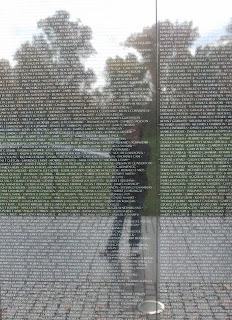 This is the only picture of me I have from the trip...reflected in the wall. 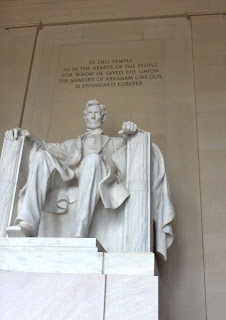 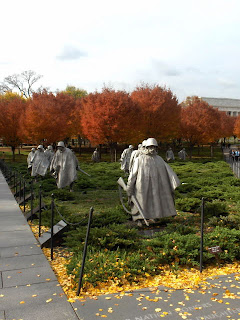 Without a doubt, my favorite Memorial was the Korean War Memorial. It wasn't quite completed when I was in DC last, and it is even more powerful completed. On the ground, carved into the sidewalk, are these words: "Our nation honors her sons and daughters who answered the call to defend a country they never knew and a people they never met." 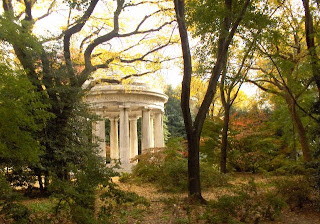 This is the WWI Rotunda. 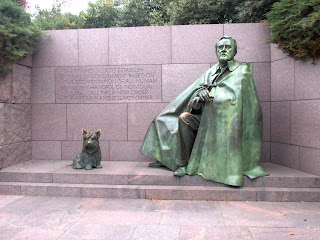 I have just one complaint about this day...can they make it ANY harder to get to the FDR and Jefferson Memorials? After two false starts and a close call with a blue sedan, I finally made my way to the FDR Memorial. I must admit, I didn't know very much about FDR. Now I know that he was in his wheelchair for his entire 4 terms as President. I know his beloved dog was named Fala. And I know that this man was a crusader for liberty, democracy, peace and equal rights. I could have spent all day there reading the quotes of this great man carved into the walls of the Memorial. 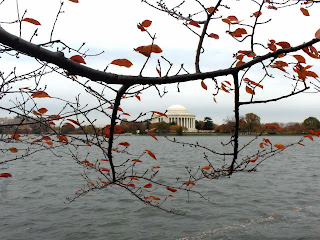 And, ah, the elusive Jefferson Memorial. I finally got a good shot of it outside the FDR Memorial along the Tidal Basin. I never made it all the way over (the biggest regret of the trip), but I had to save something for the next visit. And now I know how to get there without getting squashed by DC traffic.

And just as a final note about my last day in DC. Yes, I was the ONLY nerdy adult who bought a Kids' Club Memorial Passport to stamp all the sites I visited along the way. And I even earned my nifty pin at the end. So there.

What a fantastic trip!! I'm impressed you thought of the kid's passport. What a neat thing to show your own children, now I want one too! : ) Great pics!

The pictures were wonderful. Visiting the memorials, thinking of the many struggles of the past, is both sobering and inspiring to me--seeing what our nation has come through me courage to face the struggles of today and in the future.

WOW! I am green with envy. What fabulous and it seems an emotional trip. Well I would be very emotional visitng all those historical places. I am glad you got your passport stamped...no shame in that.

I think there are a couple of new memorials since I've toured DC. I certainly enjoyed my virtual tour with you, though! Great pictures. Thank you for sharing.

What a great day you had. How fun to enjoy taking in the sights and getting all that excersise at the same time. Your pictures came out so nice...I really love the one of the Jefferson Memorial and the tree branch.

Amber,
The photos you took are breathtaking! What amazing photography. Alright, earlier I said you could be a writer. Now we see you can illustrate your book as well girl!
So glad you got to take in these amazing sights of our great nation's capital!
xo, Les