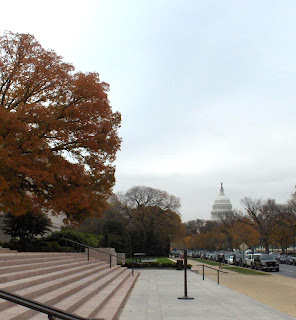 So, as the title suggests, I spent the last few days in Washington DC! Tony was selected to attend an annual JAG convention called "Keystone" at the swanky Gaylord Hotel and Convention Center in National Harbor, Maryland right on the Potomac River. Since Joan was already coming for Tony's promotion ceremony, she graciously agreed to stay some extra days and take care of the kiddos while I flew out to spend some days exploring DC and the evenings (including watching election results) with Tony. That is what finally pushed me over the edge of making the trip...who wouldn't want to be in DC on election day!? 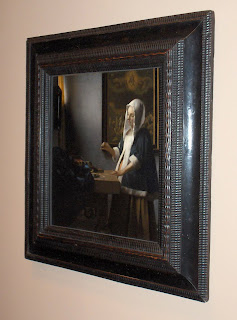 Tuesday, I took a bus to the Metro station and then the Metro to the Mall and the trip took about an hour. But I felt like such a capable grown-up for doing it all by myself...the last time I was in DC was 10 years ago and I was with a friend.
I spent the entire day exploring the Smithsonian exhibits...starting with the National Gallery where the highlights included Vermeer and Rothko...I can't believe I'm actually admitting this, but seeing this Vermeer made me short of breath! I'm such a Dutch masters nerd. 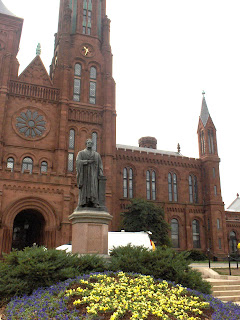 Then the National Archives, the Smithsonian Castle for lunch and a visit to the Smithson Crypt and then the Natural History Museum (where I wished that I'd had Sam with me) and the Hope Diamond. Nice. 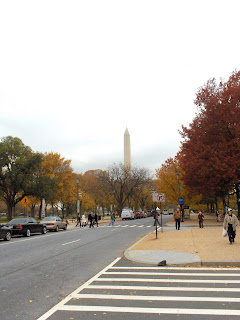 DC was glorious...the leaves were all changing color but still on the trees and the overcast skies made for really nice pictures for both days I spent on the Mall. Thank goodness, because my camera broke just as I was packing to leave, so please forgive me if photo stuff is off until I get used to Tony's camera and editing. But some of the highlights of Tuesday was seeing all the "I Voted" stickers. It made me so happy to see that so many people exercised their right to vote!!
Posted by Amber M. at 12:11 PM

sounds like SUCH a fantastic trip! the energy in D.C. must've been just phenomenal on tuesday!

Wow! What an incredible opportunity! I'm so glad you were able to go. And good for you for navigating the public transport by yourself!

I am so glad you got to go! The National Gallery is one of my very favorite places! I would go several times a week when I lived there, and it was always a thrill!

I love the feeling of DC. My kids LOVED the Natural History Museum. We lucked out on our last trip and even got to go on the White House tour when it was decked out for Christmas. How fun to be there on Election Day! And how fun to be there with just your man!

How fun - isn't DC wonderful - and all the museums are free!

I'm so glad you guys had a good and safe trip! D.C. does look very illuminated. How neat to be there during the election!

We hope to go one of these years. I'll plan on going in the fall.

I am a huge Vermeer fan. I make a point to see any of his paintings that are in a town I visit. Maybe one day I'll do a post of the ones I've seen.

By the way, I love the new banner on your blog. It's nice to see your beautiful children's faces again after looking at their backs in their Halloween costumes for while!

The Smithsonian is such an awesome place. I think I could spend an entire week just exploring all the different museums.

I just love Washington D.C.! Wish I could justify moving the whole family there... -sigh-
Someday!