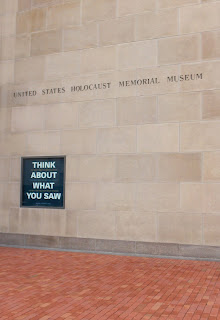 I knew this had to be the first stop on my second day exploring the Mall. I just finished re-reading one of my very favorite books, The Book Thief by Markus Zusak, which follows the story of a German girl and her foster family who hide a Jewish man in their basement during WWII, so the anguish was already at an almost unbearable level before I even got through the door.

They don't let you take any pictures inside the exhibit, but I did want to share a few impressions that I had while there. The first, is that although the things I saw there were unthinkably terrible, it wasn't so much about what you see there but about how you feel. I felt shame knowing that the first victims of Hitler were the handicapped and disabled. I felt embarrassed that there were hair color guides and wall charts describing the ways to identify "non-Aryans." I felt very small standing in hallways filled with names and faces of people I will never met, and who suffered unthinkable abuse when I am safe and free. I felt angry when the teenagers there on a high school field trip laughed and texted instead of mourning. It made we wonder if I would have been one of the truly brave, who reached out to help those around them, to hide them, to save them, or would I have turned away, content to know that I wasn't the persecutor or the persecuted. 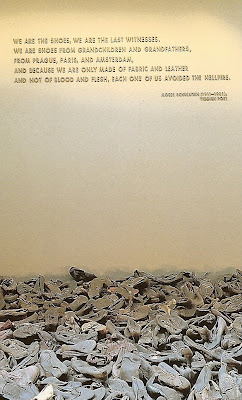 One of the most powerful exhibits was a walkway that connects two rooms. In the alcove between the two rooms and under the walkway were hundreds and hundreds of pairs of dusty shoes. Shoes taken from the feet of Jewish prisoners moments before they were led to the gas chamber. If you can't read the words on the wall, it is a quote by the Yiddish Poet Moses Schulstein that says:

"We are the shoes, we are the last witnesses.
We are the shoes from grandchildren and grandfathers,
From Prague, Paris and Amsterdam,
And because we are only made of fabric and leather
And not of blood and flesh, each one of us avoided the hellfire. "

The museum makes it a point that we know, as visitors, that we become part of the witness of the Holocaust. That it happened. That it could happen again. Now I am part of that witness. And as I was leaving, I passed a little grey-haired lady who is a Holocaust survivor. Someone who volunteers to talk to visitors, and I bet more often than not, comfort them after the horror they had just seen. Me? I couldn't even look her in the eye as I walked by. I will never know what she lived through. But I CAN bear witness.
Posted by Amber M. at 5:49 PM

Isn't it remarkable that the Holocaust survivor would offer comfort to those who witnessed exhibits of what she experienced?

I visited the museum years ago with my two older daughters. I was moved much the same way you describe so poignantly.

I would love to go and see that one day. Robert and I went to Anne Frank's hideout and it made us emotional too. Awful to think that one person can create such darkness.

I do and yet I don't want to go here. I thought about going there last year but we had Ben and Madi and they were only 7 and 5...not that they don't know some of that after living in Germany for four years and sightseeing. I just can't imaging standing looking at those shoes.

I, too, loved The Book Thief and was very moved by its story. I sobbed my way through the last third of the book.

When we were in Prague two years ago, we toured their Jewish quarter. One of the former Jewish synagogues has the names of all of the Holocaust victims from that area handwritten around all of the walls. It's quite sobering to stand and read them all and think that each of them was someone's mother, father, daughter, son, sister, brother or friend. I haven't visited the Holocaust Museum in DC yet but would like to. My stomach clinched up at the thought of the teenagers laughing and texting while in there. I would have found it difficult not to fuss at them (which wouldn't have accomplished anything, of course).

Thanks for sharing this experience. We all need to remember.

I loved my visit to D.C. when I was a teenager. They didn't have the Holocaust Museum there then but I want to go back sometime and take my kids for an ultimate homeschool trip.

How wonderful to have a Holocaust survivor there to greet people. It must be something of a healing process for them too.

It has been 10 years since I was there - your experiences brought it all back to me. Very emotional place.

Sounds like an amazing trip (even just the first two days). So glad you got to see paintings that took your breath away. I had a similar experience at the Holocaust museum in Israel. You really do become a witness and it changes you. Thanks for reminding me of that! So glad you're back!

Thank you for sharing. Very touching. I hope to go there someday.

It sounds like an incredible experience. The few pictures you were able to take speak volumes, I think.

I was really upset a few weeks ago when the teenagers working at Subway were texting while filling my order- I can't believe they would be so rude at such a historic and solemn place.

So glad you are home & that I could see you for a bit yesterday! What's your next week look like?

That is one place I plan on visiting one day. I truly feel it is important to remember the past, no matter how uncomfortable or sad it makes us. I don't understand how the teenagers you saw could be anything but moved in such a place. That is really disturbing! Even more disturbing is that it happened in the first place; it just breaks my heart when I think of all the Jewish people suffered during that time.

All your pictures bring back DC memories. That's where my dad was stationed before moving to NE. It is a HUGE deal when you can go around DC by yourself and not get lost! Believe me! So give yourself a pat on the back! sad about Holocaust! I don't know how to say it without sounding horrible, but I hate going there....so sad!

That is the one Smithsonian that we have not been to yet. I am always afraid how it will affect me. And not to mention we always have the kids with us! I am glad you enjoyed your trip to DC. We love it there!!

You captured the depth of grief so well here. Feeling guilty for a time in which we didn't truly live and breathe, only shows our humanity more.

It's haunting, and unthinkable. And yet, it happened. How can that be? How can these atrocities be? And still continue (Darfur, Rwanda.)

You wrote this post so well. You truly have a gift for writing my dear. It brings tears to my eyes because I'm recalling going with my parents to Dachau as a child and then taking Jas and Bryce when we lived in Germany a few years ago. We could not walk through the museum part I went through as a preteen because Bryce was still too young, but walking through the gas chamber house, the building foundations, etc... Very emotional indeed. Although sad, I am glad you got to see this place and tell us about it...
xo, Les