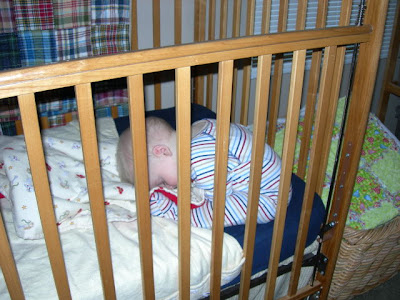 Awww...he had to have been so tired. Sweet little guy!

If only I were that limber!

Ahh he is sooo cute. When my daughter was that age I would often find her squashed up in a corner and when I moved she would have an imprint of the cot rungs on her face! It never woke her up, it would have annoyed me, I am convinced that babies and toddlers are made of an unknown rubber to be able to sleep inall the odd positions that they get into.

Oh my gosh, how cute is that? He must have been so beat!!

At least he's sleeping right! Whatever it takes... he is sure cute sitting like that though

The only explanation for this is
that Josh is made of silly putty.
He is just so adorable.

Wow-glad you got a pic of that-hard to believe it is comfy enough to sleep...

that is sooo adorable! i think christian has/had that sleeper too! those two just have to get together and play sometime soon.

Wow! Kaikane and Josh really are twins! I have found Kaikane many nights in his crib like this. One time he was even standing up in the corner asleep resting his head on the crib. It is so cute though.